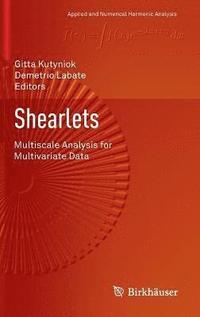 av Gitta Kutyniok, Demetrio Labate
Inbunden Engelska, 2012-03-09
1449
Köp
Spara som favorit
Skickas inom 3-6 vardagar.
Fri frakt inom Sverige för privatpersoner.
Finns även som
Visa alla 1 format & utgåvor
Over the last 20 years, multiscale methods and wavelets have revolutionized the field of applied mathematics by providing an efficient means of encoding isotropic phenomena. Directional multiscale systems, particularly shearlets, are now having the same dramatic impact on the encoding of multidimensional signals. Since its introduction about five years ago, the theory of shearlets has rapidly developed and gained wide recognition as the superior way of achieving a truly unified treatment in both a continuous and a digital setting. By now, it has reached maturity as a research field, with rich mathematics, efficient numerical methods, and various important applications.
Visa hela texten

With a broad range of experience as a scholar and a professor over the past 15 years, Gitta Kutyniok has received numerous awards for her teaching and research, including the Weierstrass Prize for outstanding teaching at the Universitat Paderborn in 1998, the Research Prize of the University Giessen in 2006, and the prestigious von Kaven Prize in 2007. More recently, she has served as an Associate Editor for the Journal of Wavelet Theory and Applications; as a Corresponding Editor for Acta Applicandae Mathematicae; and as an Advisory Board member for Birkhauser's Applied and Numerical Harmonic Analysis series. She was a panelist for the NSF in 2008 and serves as a reviewer for the European Commission, the DFG-German Research Foundation, the Israel Science Foundation, the NSF, and the French National Research Agency, among others. She has published one book and over 75 peer-reviewed journal and conference publications. Demetrio Labate received his Ph.D. in Electrical Engineering from the Politecnico di Torino, Italy, and his M.S. in Applied Mathematics and his Ph.D. in Mathematics from the Georgia Institute of Technology, Atlanta, GA, where he received the Sigma Xi Best Ph.D. Thesis Award in 2000. In 2008, he was awarded the NSF Career Award for young investigators for his research on shearlets. His research is currently funded by the National Science Foundation, the Army Research Office, and the Norman Hackerman Advance Research Program. He is an Associate Editor for the Journal of Wavelet Theory and Applications, and he is author or coauthor of over 60 publications in both mathematical and engineering journals.