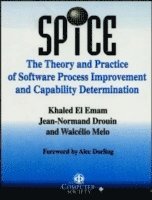 The Theory and Practice of Software Process Improvement and Capability Determination

av Khaled El Emam, Jean-Normand Drouin, Walcelio Melo
Inbunden Engelska, 1997-10-01
1149
Köp
Spara som favorit
The SPICE (Software Process Improvement and Capability dEtermination) Project is a joint effort by the ISO and IEC to create an international standard for software process assessment. This book covers both the theory of SPICE and its practical applications, including the lessons learned from the SPICE trials. It includes a valuable automated tool on CD-ROM to help you apply the concepts presented in the book. The text shows the evolution of the most recent developments in the SPICE project. It documents the major products and the empirical evaluations that have been conducted thus far. The book is jointly written by the key experts involved in the SPICE project. The theory chapters describe the rationale behind the architecture and the contents of the V1.0 and V2.0 document set and how to interpret them. The remaining chapters describe the applications and how that make use of the theory behind them.
Visa hela texten

Khaled El Emam obtained his PhD from the Department of Electrical and Electronics Engineering, King's College, the University of London (UK) in 1994. He was previously a research scientist at the Centre de recherche informatique de Montreal (CRIM) in Canada. Currently he is the head of the Quantitative Methods Group at the Fraunhofer Institute for Experimental Software Engineering in Germany. El Emam is also the founding and current editor of the IEEE TCSE Software Process Newsletter. He is a member of the Core Trials Team of ISO's SPICE Project, which is empirically evaluating the emerging International Standard. He has previously worked in both small and large software research and development projects for organizations such as Toshiba International Company and Honeywell Control Systems. He has published more than forty articles on software engineering measurement, empirical evaluation in software engineering, software process improvement, and requirements engineering. Jean-Normand Drouin has more than 12 years experience as a software engineer at Bell Canada, the largest Telecom company in Canada. He is a Trillium author and assessor (Trillium is Bell Canada's own Software Process Assessment method for the Telecommunications industry). He is also the SPICE Technical Center Manager for Canada, Central and South America, as well as one of the first SPICE assessors. Alec Dorling is the international SPICE Project Manager. He is currently resident at IVF's Centre for Software Engineering in Sweden. Previously he was the International and Strategic Project Manager at the European Software Institute (ESI) in Spain. Alec is a Chartered Engineer with 25 years experience in the software industry gained both in real-time and commercial systems environments. He is an internationally-recognized expert in the field of Software Quality Management and Process Improvement. Alec has been involved with most of the UK Government's initiatives in software engineering and software quality over the years, including the STARTS program, the Software Tools Demonstration Centre, the Software Engineering Solutions program, the Quality Management Library, and TickIT. He has also been consultant to the Software Quality Unit of the UK Department of Trade and Industry providing advise on priorities for government action on Software Quality, Standards, and Certification . He carried out the initial studies for the UK Ministry of Defence which were a precursor to the launch of the SPICE Project.