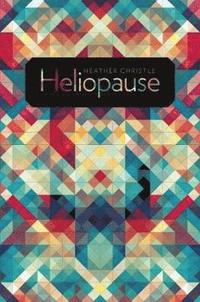 av Heather Christle
Häftad Engelska, 2016-10-06
149
Köp
Spara som favorit
Finns även som
Visa alla 1 format & utgåvor
Heather Christle's stunning fourth collection blends disarming honesty with keen leaps of the imagination. Like the boundary between our sun's sphere of influence and interstellar space, from which the book takes its name, the poems in Heliopause locate themselves along the border of the known and unknown, moving with breathtaking assurance from the page to the beyond. Christle finds striking parallels between subjects as varied as the fate of Voyager 1, the uncertain conception of new life, the nature of elegy, and the decaying transmission of information across time. Nimbly engaging with current events and lyric past, Heliopause marks a bold shift and growing vision in Christle's work. An online reader's companion will be available.
Visa hela texten

"Proof that the world of poetry chugs along with quiet but spirited strength, Christle publishes her fourth collection, filled with imagination and sharp personal moments."--Tiffany Gilbert, TimeOut New York "In Heliopause Heather Christle moves away from the jaunty surrealism of her first three books toward a circumspect yet quietly assured voice. The shift is fitting, as the poems are concerned largely with processes: what it means to come into and pass out of being and how art is made as both record and antidote."--SCOUT Poetry "What do we do in the face of this unknowing? Perhaps the greatest strength of Christle's work is she doesn't pretend to know the solution to such an unanswerable problem. She wrestles with possibilities, but the struggle is never solved absolutely. Instead, we see that struggle enacted, challenging our sense of self and our relationship to knowledge, and Christle earns authority and the trust of her readers not by conquering unknowing but by accepting it."--Andy Chen, Colorado Review "[Christle] is in no way resigned to the inefficiency of language, she is merely attempting to put it in its place and to make that place more real than language can be. This is what good poetry means to me."--Heather Brown, The Volta "These are not conventional narrative poems, and, as with her other books, Christle provides a sense of lyric exigency that is both humorous and necessary, leaving little excess but comprising a world that leaves readers with ways to get in. These are poems of habitation, in the sense that a linguist would dwell in language."--Laura Carter, Jacket 2 "Readers will recall Dickinson's defiant, but also despairing, verdict: 'The Brain is Wider than the Sky.' And just as Dickinson catalogs the distance between perception and 'the things themselves, ' so too Christle recognizes the gulf between experience and knowledge. Christle is at her best holding our feet (and hers) to the fire, and Heliopause, for the most part, keeps the heat up."--Tyrone Williams, Rain Taxi "Heliopause signals a new direction for Christle, one that she embarks upon skillfully. [She] turns to speak about the terrified world in poems notable for their clear, earnest, and committed voice."--Julie Swarstad Johnson, Harvard Review "In Heather Christle's fourth volume, her fast-paced, lambent voice gains gravity by exploring spaceChristle has always found humor in unexpected places, but the poems of this volume seek out the sadness that undergirds humor, exploring the lacunae between levity and loss, the alphabet and the objects the words represent, life and what remains after death."--Kristen Bartholomew Ortega, Boston Review "[R]ising star Heather Christle attempts to transcend our solar system with the aptly titled Heliopause. Her fourth book, and second from Wesleyan, probes the boundaries of the known and unknown like a poetic Voyager 1."--Alex Crowley, Publishers Weekly "Proof that the world of poetry chugs along with quiet but spirited strength, Christle publishes her fourth collection, filled with imagination and sharp personal moments."--Tiffany Gilbert, TimeOut New York "In the end, the magic is what it's all about. Say what you want about intent or position, but the point is, at its heart, here is a book easily larger than the sum of all its parts; it widens the rift between fantasy and reality in a way that makes the world somehow both clearer and more mysterious, a space outside of outer space itself."--Blake Butler, Vice

Heather Christle is the author of What Is Amazing, The Difficult Farm, and The Trees The Trees, which won the 2012 Believer Poetry Award. She has taught poetry at Antioch College, Sarah Lawrence College, the University of Massachusetts Amherst, and Emory University. She currently lives in Yellow Springs, Ohio, and this is her fourth book of poetry.