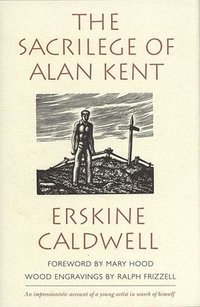 av Erskine Caldwell
Inbunden Engelska, 1996-01-01
249
Köp
Spara som favorit
As Mary Hood writes in her foreword, "The Sacrilege of Alan Kent is unique. Comparisons are not odious, they are impossible. There is nothing like it in any of Caldwell's published works, nor can we find its example in all of American literature." Alan Kent is a wanderer, a seeker. Driven by, or fleeing from, unnamed forces, he struggles against the hardening effects of a brutal and indifferent world. In a series of episodes, Erskine Caldwell tells the semiautobiographical story of Kent's childhood, roving early manhood, and transformation into an artist. The episodes, which range from brief, graphic sketches to one-sentence impressions, are filled with elemental images of light and darkness, blood and water, earth and sky. Although an early work, The Sacrilege of Alan Kent shows readers the poetic economy, stark naturalism, and concern for the South's poorest people that became the hallmarks of Caldwell's later work.
Visa hela texten

Erskine Caldwell (1903-1987) was born in Newnan, Georgia. He became one of America's most widely read, prolific, and critically debated writers, with a literary output of more than sixty titles. At the time of his death, Caldwell's books had sold eighty million copies worldwide in more than forty languages. He was elected to the American Academy of Arts and Letters in 1984.