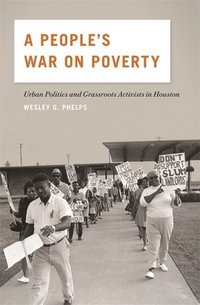 A People's War on Poverty

av Wesley G Phelps
Häftad Engelska, 2014-03-30
309
Köp
Spara som favorit
Skickas inom 10-15 vardagar.
Fri frakt inom Sverige för privatpersoner.
Finns även som
Visa alla 1 format & utgåvor
In A People's War on Poverty, Wesley G. Phelps investigates the on-the-ground implementation of President Lyndon Johnson's War on Poverty during the 1960s and 1970s. He argues that the fluid interaction between federal policies, urban politics, and grassroots activists created a significant site of conflict over the meaning of American democracy and the rights of citizenship that historians have largely overlooked. In Houston in particular, the War on Poverty spawned fierce political battles that revealed fundamental disagreements over what democracy meant, how far it should extend, and who should benefit from it. Many of the programme's implementers took seriously the federal mandate to empower the poor as they pushed for a more participatory form of democracy that would include more citizens in the political, cultural, and economic life of the city. At the centre of this book are the vitally important but virtually forgotten grassroots activists who administered federal War on Poverty programmes, including church ministers, federal programme volunteers, students, local administrators, civil rights activists, and the poor themselves. The moderate Great Society liberalism that motivated the architects of the federal programmes certainly galvanised local antipoverty activists in Houston. However, their antipoverty philosophy was driven further by prophetic religious traditions and visions of participatory democracy and community organising championed by the New Left and iconoclastic figures like Saul Alinsky. By focusing on these local actors, Phelps shows that grassroots activists in Houston were influenced by a much more diverse set of intellectual and political traditions, fueling their efforts to expand the meaning of democracy. Ultimately, this episode in Houston's history reveals both the possibilities and the limits of urban democracy in the twentieth century.
Visa hela texten

Wesley G. Phelps has written an engaging and informative case study . . . [I] recommend this work to both academic and general readers interested in American civil rights history. . . . Phelps has provided a valuable and significant contribution to the scholarship on America's War on Poverty.--M. Courtney Welch "Southwestern Historical Quarterly " Wesley Phelps reveals a largely unacknowledged Houston. He tells a story of poverty and power through a series of moments when a diverse group of local people told a generation how things had to be different. Battling over ideas from prophetic Christianity, the radical New Left, the emerging Sunbelt, the Old South, and the controversial War on Poverty, they launched a fierce argument about the kind of power that working Americans should have and the kind of Houston that would emerge from the end of Jim Crow.--Kent B. Germany "author of New Orleans after the Promises: Poverty, Citizenship, and the Search for the Great Society " Wesley G. Phelps's A People's War on Poverty is an important contribution to the growing historical literature about the antipoverty crusade at the local level. The focus is on Houston, one of the most understudied cities in the South, and on the grassroots activists who fought there. . . . In addition to being an important piece of historical scholarship, this well-written book will easily find its way into college classes on the War on Poverty, the long civil rights movement, and the rise of late twentieth-century conservatism. It also takes its place in the growing and stimulating literature on post- World War II Texas.--Robert Korstad "Journal of American History "