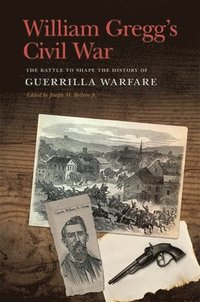 The Battle to Shape the History of Guerrilla Warfare

av William H Gregg, Joseph M Beilein Jr
Häftad Engelska, 2019-07-30
339
Köp
Spara som favorit
Skickas inom 7-10 vardagar.
Fri frakt inom Sverige för privatpersoner.
Finns även som
Visa alla 2 format & utgåvor
During the Civil War, William H. Gregg served as William Clarke Quantrill's de facto adjutant from December 1861 until the spring of 1864, making him one of the closest people to the Confederate guerrilla leader. "Quantrill's raiders" were a partisan ranger outfit best known for their brutal guerrilla tactics, which made use of Native American field skills. Whether it was the origins of Quantrill's band, the early warfare along the border, the planning and execution of the raid on Lawrence, Kansas, the Battle of Baxter Springs, or the dissolution of the company in early 1864, Gregg was there as a participant and observer. This book includes his personal account of that era. The book also includes correspondence between Gregg and William E. Connelley, a historian. Connelley was deeply affected by the war and was a staunch Unionist and Republican. Even as much of the country was focusing on reunification, Connelley refused to forgive the South and felt little if any empathy for his Southern peers. Connelley's relationship with Gregg was complicated and exploitive. Their bond appeared mutually beneficial, but Connelley manipulated an old, weak, and naive Gregg, offering to help him publish his memoir in exchange for Gregg's inside information for a biography of Quantrill.
Visa hela texten

An important new editing and interpretation of a valuable primary source, William Gregg's Civil War is a decidedly useful contribution to the burgeoning historiography of the guerrilla conflict in Missouri and elsewhere. Highly recommended.--Civil War Books and Authors Gregg's prose is brisk and lively as the guerrilla moves through his many experiences serving under William Quantrill. Rather than simply an edited version of Gregg's memoir. . . Beilein uses the work as a thoughtful case study of the ways in which history is made and unmade.--The Civil War Monitor

William H. Gregg (1838-1916) was born in Jackson County, Missouri. He was married to Elizabeth Eleanor Hook; they had five children. During the Civil War, Gregg served under William Clarke Quantrill from late 1861 to early 1964. After leaving Quantrill's band, he joined General Joe Shelby and was made a captain in Shanks's Brigade. After the war Gregg returned to his farm in Jackson County and served as a deputy sheriff, during which time he wrote of his experiences with Quantrill. Joseph M. Beilein Jr is an assistant professor of history at Penn State Erie, The Behrend College. He is the author of Bushwhackers: Guerrilla Warfare, Manhood, and the Household in Civil War Missouri and coeditor of The Civil War Guerrilla: Unfolding the Black Flag in History, Memory, and Myth.