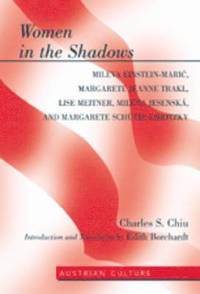 Women in the Shadows

av Edith Borchardt
Inbunden Engelska, 2008-07-01
809
Köp
Spara som favorit
Skickas inom 3-6 vardagar.
Fri frakt inom Sverige för privatpersoner.
Women in the Shadows discusses the biographies of five brilliant and talented women born in the Austro-Hungarian Empire: Mileva Einstein-Maric, Margarete Jeanne Trakl, Lise Meitner, Milena Jesenska, and Margarete Schutte-Lihotzky. Charles S. Chiu creates "a narrative against forgetting, as a small step out of darkness" by writing about these women's accomplishments, which were overshadowed by those of the famous men in their lives. Edith Borchardt's translation brings this narrative to a wider audience. Women in the Shadows will interest scientists and scholars in the humanities as well as the general reader. The women portrayed represent various fields - mathematics, physics, music and literature, journalism, and architecture - making Women in the Shadows suitable for courses on the history of science, German and Austrian studies, as well as women's studies.
Visa hela texten

Bloggat om Women in the Shadows

The Author: Charles S. Chiu has been living in Vienna since 1975. He studied philosophy, journalism, and theatre at the University of Vienna and has published numerous television scripts and two books: Frauen im Schatten (1994) and Zwischen Eros und Tod (1996). The Translator: Edith Borchardt, Professor of German at the University of Minnesota, Morris, is the author of Mythische Strukturen im Werk Heinrich von Kleists (1987). She received her A.B. from Vassar College and her M.A. and her Ph.D. from the University of California, Berkeley.