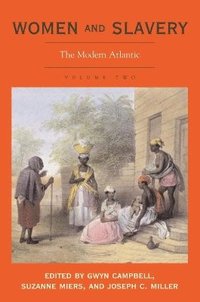 "Women and Slavery (Volumes 1 & 2) makes a significant contribution to our understanding of slavery in a global context" and "showing the centrality of women to slave systems around the world." "(Women and Slavery, Vols. 1 & 2) are accomplished, extensive and innovative collections that make a major contribution not only to slavery studies, but also to the histories of the various regions represented, to 'women's history,' and to gender, race and area studies more generally." (Women and Slavery: Africa, the Indian Ocean World, and the Medieval North Atlantic) and its sister publication, Women and Slavery: The Modern Atlantic, by the same editors, work masterfully together and could serve as the basis for an entire course on women and slavery." "The geographic and methodological diversity of the chapters constitute one of the collection's salient appeals.... The two volumes challenge us to reconsider women and slavery and appreciate the strongly gendered nature of servitude in world history." "(T)he anthology raises a number of important questions and provides scholarship of the highest quality on a subject that has too often been omitted from early studies of slavery." "Nicely, (Women and Slavery, Vol. 2) reads as a conversation-among people who disagree-about the 'second sex' and slavery.... The collection should be commended for its panoply of concerns and authors and its breadth and depth of historical research. " "I believe these essays have an audience among anyone interested not only in the intersecting histories of slavery and women, but also those who are intrigued more generally by the historian's craft." -- Susan E. O'Donovan, coeditor of Freedom: A Documentary History of Emancipation, 1861-1867 and author of Slavery's Legacies: Becoming Free in the Cotton South

Gwyn Campbell, Canada Research Chair in Indian Ocean World History at McGill University, is the author and editor of many works, including Abolition and Its Aftermath in Indian Ocean Africa and Asia and An Economic History of Imperial Madagascar. Suzanne Miers is professor emerita of history at Ohio University. She is the author of Slavery in the Twentieth Century and coeditor of The End of Slavery and other books. Joseph C. Miller is the T. Cary Johnson, Jr. Professor of history at the University of Virginia. He is the author of Kings and Kinsmen, Way of Death, and works on the world history of slavery.

The Americas; Gwyn Campbell, Suzanne Miers, and Joseph C. Miller Introduction; Mariza de Carvalho Soares Gender and Power among African Catholics in Colonial Brazil; Myriam Cottias Gender and Republican Citizenship in the French West Indies, 1848-1945; Bernard Moitt Freedom from Bondage at a Price: Women and Redemption from Slavery in the French Caribbean in the Nineteenth Century; Laurence Brown and Tara Inniss The Slave Family in the Transition to Freedom: Barbados, 1834-41; Kenneth Morgan Slave Women and Reproduction in Jamaica, c. 1776-1834; Henrice Altink Deviant and Dangerous: Proslavery Representations of Jamaican Slave Women's Sexuality, c. 1780-1834; Richard Follett "Lives of Living Death": The Reproductive Lives of Slave Women in the Cane World of Louisiana; Barbara Krauthamer A Particular Kind of Freedom: Black Women, Slavery, Kinship, and Freedom in the American Southeast; Laura Edwards Enslaved Women and the Law: Paradoxes of Subordination in the Post-Revolutionary Carolinas; Felipe Smith The "Condition of the Mother": The Legacy of Slavery in African American Literature of the Jim Crow Era; Claire Robertson and Marsha Robinson (Re)Modeling Slavery as if Women Matter/ed; Joseph C. Miller Domiciled and Domesticated: Slaving as a History of Women.