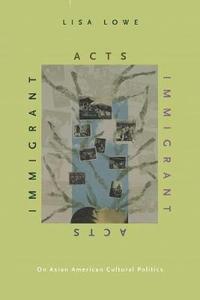 av Lisa Lowe
Häftad Engelska, 1996-10-01
347
Köp
Spara som favorit
Finns även som
Visa alla 2 format & utgåvor
In Immigrant Acts, Lisa Lowe argues that understanding Asian immigration to the United States is fundamental to understanding the racialized economic and political foundations of the nation. Lowe discusses the contradictions whereby Asians have been included in the workplaces and markets of the U.S. nation-state, yet, through exclusion laws and bars from citizenship, have been distanced from the terrain of national culture. Lowe argues that a national memory haunts the conception of Asian American, persisting beyond the repeal of individual laws and sustained by U.S. wars in Asia, in which the Asian is seen as the perpetual immigrant, as the "foreigner-within." In Immigrant Acts, she argues that rather than attesting to the absorption of cultural difference into the universality of the national political sphere, the Asian immigrant-at odds with the cultural, racial, and linguistic forms of the nation-displaces the temporality of assimilation. Distance from the American national culture constitutes Asian American culture as an alternative site that produces cultural forms materially and aesthetically in contradiction with the institutions of citizenship and national identity. Rather than a sign of a "failed" integration of Asians into the American cultural sphere, this critique preserves and opens up different possibilities for political practice and coalition across racial and national borders. In this uniquely interdisciplinary study, Lowe examines the historical, political, cultural, and aesthetic meanings of immigration in relation to Asian Americans. Extending the range of Asian American critique, Immigrant Acts will interest readers concerned with race and ethnicity in the United States, American cultures, immigration, and transnationalism.
Visa hela texten

"Immigrant Acts is a compelling and persuasively written presentation of Asian American 'cultural production.' It is both an exciting and instructive volume."-Barbara Harlow, The University of Texas at Austin "At long last a study that theorized the crucial place of the Asian American Immigrant Subject in the historical constitution of "the color line," and thus, in the making of America. Tracing the genealogy of Asian immigrant labor and cultural production in the racial and gender formations of the pre-World War II, and contemporary U.S. State, Lisa Lowe offers us an ambitious, elegant, and incisive analysis that propels Asian immigrant women workers (and comparative feminist theory) to the center of discourses of nation and citizenship. Truly a book for the twenty first century."-Chandra Talpade Mohanty, Hamilton College "In Immigrant Acts, Lowe grapples with some of the most challenging and complex issues before us in the humanities and in cultural studies today. This is a major work by a mature scholar who brings authority and wisdom to her subject."-Emory Elliott, University of California, Riverside "Lisa Lowe does the most important and influential work in Asian American cultural studies today. Her book is noteworthy for its breathtakingly skillful deployment of 'materialist methodology,' its penetrating and sensitive interpretations of various works of literature and film, and its attention to the relationships between Asian American cultural production and social and political issues in Asian American communities. Immigrant Acts is written with sophisticated grace. A profoundly and passionately humane voice emerges from it."-Elaine H. Kim, University of California, Berkeley "Lisa Lowe has written a brilliant, erudite, and meticulously thorough 'genealogy' and critique of the U.S. institution of citizenship and immigration acts. Immigrant Acts will take its place as an indispensable text for theorists in cultural studies, ethno-racial literary studies, and Asian American feminist materialist critique. A stunning tour de force!"-Jose David Saldivar, University of California, Berkeley

Lisa Lowe is Samuel Knight Professor of American Studies at Yale University, and is the author of Critical Terrains: French and British Orientalisms and coeditor (with David Lloyd) of The Politics of Culture in the Shadow of Capital (Duke University Press).