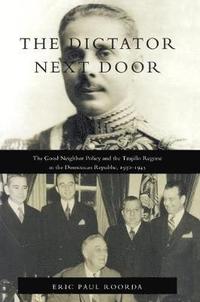 The Dictator Next Door

The Good Neighbor Policy and the Trujillo Regime in the Dominican Republic, 1930-1945

av Eric Paul Roorda
Häftad Engelska, 1998-10-01
399
Köp
Spara som favorit
Skickas inom 5-8 vardagar.
Fri frakt inom Sverige för privatpersoner.
Beställ boken senast tisdag 15 december kl. 11:30 för leverans innan julafton
Finns även som
Visa alla 2 format & utgåvor
The question of how U.S. foreign policy should manage relations with autocratic governments, particularly in the Caribbean and Latin America, has always been difficult and complex. In The Dictator Next Door Eric Paul Roorda focuses on the relations between the U.S. and the Dominican Republic following Rafael Trujillo's seizure of power in 1930. Examining the transition from the noninterventionist policies of the Hoover administration to Roosevelt's Good Neighbor policy, Roorda blends diplomatic history with analyses of domestic politics in both countries not only to explore the political limits of American hegemony but to provide an in-depth view of a crucial period in U.S. foreign relations. Although Trujillo's dictatorship was enabled by prior U.S. occupation of the Dominican Republic, the brutality of his regime and the reliance on violence and vanity to sustain his rule was an untenable offense to many in the U.S. diplomatic community, as well as to certain legislators, journalists, and bankers. Many U.S. military officers and congressmen, however-impressed by the civil order and extensive infrastructure the dictator established-comprised an increasingly powerful Dominican lobby. What emerges is a picture of Trujillo at the center of a crowded stage of international actors and a U.S. government that, despite events such as Trujillo's 1937 massacre of 12,000 Haitians, was determined to foster alliances with any government that would oppose its enemies as the world moved toward war. Using previously untapped records, privately held papers, and unpublished photographs, Roorda demonstrates how caution, confusion, and conflicting goals marked U.S. relations with Trujillo and set the tone for the ambivalent Cold War relations that prevailed until Trujillo's assassination in 1961. The Dictator Next Door will interest Latin Americanists, historians, political scientists, and specialists in international relations and diplomacy.
Visa hela texten

"An essential history of American presidents Herbert Hoover and FDR's failed 'Good Neighbor Policy' in Latin America detailing how Trujillo manged to maintain support in Washington by siding against first the Fascists and later the Communists, despite the blatant horrors of his regime." * Rough Guide to the Dominican Republic * "Roorda's book is a substantial contribution not only to our understanding of the dynamics of U.S.-Latin American relations during the Good Neighbor era but to an emerging international history that documents the capacity of small states on the peripheries of world power to influence the policies of superpowers at the center of the international system." -- Michael Grow * American Historical Review * "For an excellent view of the Good Neighbor Policy in action and the role of the military in basic foreign relations, this book is required reading." -- Robert Freeman Smith * Military History * "[A] definitive account of United States policies toward the Dominican Republic during the first half of Rafael Trujillo's odious regime. . . . [An] excellent study." -- Stephen G. Rabe * Journal of American History * "The Dictator Next Door . . . is a well-told story of relations between the United States and the Dominican Republic during the 1930s and 1940s. Perhaps the most important contribution of Roorda's work is his convincing depiction of the buildup of Rafael Trujillo's empire using the good neighbor policy to his advantage." -- Daniela Spenser * Hispanic American Historical Review * "An excellent piece of research on a topic that is both important and neglected. Roorda's determination to look at this bilateral relationship as the product of a multiplicity of actors is indeed unique."-Bruce Calder, University of Illinois at Chicago "The Dictator Next Door is a powerfully argued, full-blown diplomatic history that sheds much useful light on a crucial period of United States foreign relations. There are many fine studies of the Good Neighbor Policy, but none comes close to Roorda's densely textured knowledge of U.S.-Dominican relations."- Lars Schoultz, University of North Carolina at Chapel Hill