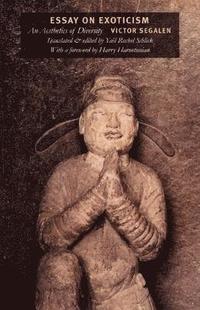 An Aesthetics of Diversity

av Victor Segalen
Häftad Engelska, 2002-01-01
219
Köp
Spara som favorit
Skickas inom 10-15 vardagar.
Fri frakt inom Sverige för privatpersoner.
Finns även som
Visa alla 2 format & utgåvor
The "Other"-source of fear and fascination; emblem of difference demonized and romanticized. Theories of alterity and cultural diversity abound in the contemporary academic landscape. Victor Segalen's early attempt to theorize the exotic is a crucial reference point for all discussions of alterity, diversity, and ethnicity. Written over the course of fourteen years between 1904 and 1918, at the height of the age of imperialism, Essay on Exoticism encompasses Segalen's attempts to define "true Exoticism." This concept, he hoped, would not only replace nineteenth-century notions of exoticism that he considered tawdry and romantic, but also redirect his contemporaries' propensity to reduce the exotic to the "colonial." His critique envisions a mechanism that appreciates cultural difference-which it posits as an aesthetic and ontological value-rather than assimilating it: "Exoticism's power is nothing other than the ability to conceive otherwise," he writes. Segalen's pioneering work on otherness anticipates and informs much of the current postcolonial critique of colonial discourse. As such Essay on Exoticism is essential reading for both cultural theorists or those with an interest in the politics of difference and diversity.
Visa hela texten

"Essays on Exoticism is a most peculiar document. It was never finished, and never meant to be. . . . It is almost always interesting, because Segalen is interesting, and because he was trying to come to grips with something that still preoccupies many of us more than ever." -- Ian Buruma * New York Review of Books * "It is exciting to see Segalen's most comprehensive and influential theoretical text translated into English, particularly given its growing impact on colonial/postcolonial studies."-Chris Bongie, College of William and Mary "At a time when the moral battles for the 'other' have been waged, when the constructedness of identities has been demonstrated in extenso, it comes as a refreshing surprise to see Segalen struggle with the terminology of otherness and difference in the context of the term exoticism. His ruminations represent a fascinating and important intervention in present theoretical debates. For too long Segalen has been a secret among the initiate few; the time for broadcasting his ideas more widely is overdue."-Andreas Michel, Indiana University