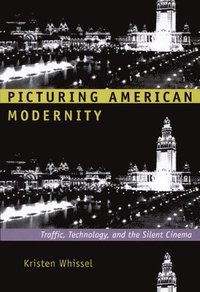 Traffic, Technology, and the Silent Cinema

av Kristen Whissel
Häftad Engelska, 2008-10-03
239
Köp
Spara som favorit
Skickas inom 10-15 vardagar.
Fri frakt inom Sverige för privatpersoner.
Finns även som
Visa alla 2 format & utgåvor
In Picturing American Modernity, Kristen Whissel investigates the relationship between early American cinema and the experience of technological modernity. She demonstrates how between the late 1890s and the eve of the First World War moving pictures helped the U.S. public understand the possibilities and perils of new forms of "traffic" produced by industrialization and urbanization. As more efficient ways to move people, goods, and information transformed work and leisure at home and contributed to the expansion of the U.S. empire abroad, silent films presented compelling visual representations of the spaces, bodies, machines, and forms of mobility that increasingly defined modern life in the United States and its new territories.Whissel shows that by portraying key events, achievements, and anxieties, the cinema invited American audiences to participate in the rapidly changing world around them. Moving pictures provided astonishing visual dispatches from military camps prior to the outbreak of fighting in the Spanish-American War. They allowed audiences to delight in images of the Pan-American Exposition, and also to mourn the assassination of President McKinley there. One early film genre, the reenactment, presented spectators with renditions of bloody battles fought overseas during the Philippine-American War. Early features offered sensational dramatizations of the scandalous "white slave trade," which was often linked to immigration and new forms of urban work and leisure. By bringing these frequently distant events and anxieties "near" to audiences in cities and towns across the country, the cinema helped construct an American national identity for the machine age.
Visa hela texten

"In Picturing American Modernity, Kristen Whissel thinks through the relation between early cinema and American culture at the turn of the century in imaginative and original ways. Probing cinema's interaction with both current events and other forms of mass entertainment (such as the Spanish-American War, the World Expositions, and Buffalo Bill's Wild West show), Whissel traces the creation of a new mass audience and cinema's role in shaping the culture of American imperialism. Her in-depth analysis of the films Traffic in Souls and Shoes reveals that the concept of 'traffic' can also organize strategies of film narration, as the cinema began to define itself as a new form of storytelling and national identity."-Tom Gunning, author of The Films of Fritz Lang: Allegories of Vision and Modernity "Picturing American Modernity is a noteworthy contribution to the ongoing historiographic reworking of early cinema history. It is based on excellent archival work, which leads to new conclusions about the complex forces that shaped the cinema in its first two decades."-Anne Friedberg, author of The Virtual Window: From Alberti to Microsoft

Kristen Whissel is Associate Professor of Film Studies at the University of California, Berkeley.

Acknowledgments ix Introduction 1 1. The Early Cinema Encounters Empire: War Actualities, American Modernity, and Military Masculinity 21 2. Placing Audiences on the Scene of History: Modern Warfare and the Battle Reenactment at the Turn of the Century 63 3. Electric Modernity and the Cinema at the Pan-American Exposition: The City of Living Light 117 4. Regulating Mobility: Traffic, Technology, and Feature-Length Narrativity 161 Conclusion 215 Notes 233 Bibliography 253 Index 263