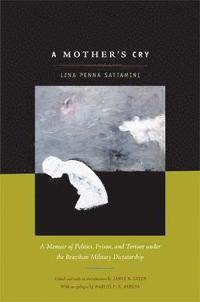 A Memoir of Politics, Prison, and Torture under the Brazilian Military Dictatorship

av Lina Sattamini, James N Green
Inbunden Engelska, 2010-06-09
919
Bevaka
Spara som favorit
Tillfälligt slut – klicka "Bevaka" för att få ett mejl så fort boken går att köpa igen.
Finns även som
Visa alla 1 format & utgåvor
During the late 1960s and early 1970s, Brazil's dictatorship arrested, tortured, and interrogated many people it suspected of subversion; hundreds of those arrested were killed in prison. In May 1970, Marcos P. S. Arruda, a young political activist, was seized in Sao Paulo, imprisoned, and tortured. A Mother's Cry is the harrowing story of Marcos's incarceration and his family's efforts to locate him and obtain his release. Marcos's mother, Lina Penna Sattamini, was living in the United States and working for the U.S. State Department when her son was captured. After learning of his arrest, she and her family mobilized every resource and contact to discover where he was being held, and then they launched an equally intense effort to have him released. Marcos was freed from prison in 1971. Fearing that he would be arrested and tortured again, he left the country, beginning eight years of exile.Lina Penna Sattamini describes her son's tribulations through letters exchanged among family members, including Marcos, during the year that he was imprisoned. Her narrative is enhanced by Marcos's account of his arrest, imprisonment, and torture. James N. Green's introduction provides an overview of the political situation in Brazil, and Latin America more broadly, during that tumultuous era. In the 1990s, some Brazilians began to suggest that it would be best to forget the trauma of that era and move on. Lina Penna Sattamini wrote her memoir as a protest against historical amnesia. First published in Brazil in 2000, A Mother's Cry is testimonial literature at its best. It conveys the experiences of a family united by love and determination during years of political repression.
Visa hela texten

"This work provides ample detail of the tortures inflicted by the OBAN secret police...This book is a memorable and highly readable human story and source that has gained a new relevancy since its publication." -- Philip Evanson * The Americas * "A Mother's Cry should rank among the foremost publications of the testimonial genre and is suitable for a broad, interdisciplinary audience interested in human rights, resistance, and social justice." -- Cathy Marie Ouellette * History * "... this tale of mother and son brings to light a never to be forgotten break in Brazil's long-standing history of democracy." -- Linda S. Maier * Bulletin of Latin American Research * "A family's chance descent into the indignities of Brazil's military dictatorship is uncompromisingly recorded in nearly a decade of letters penned across continents; so too is the inextinguishable hope to set free a son, grandson, and brother. Arbitrarily imprisoned, brutally tortured, and subsequently whisked abroad to safety, Marcos P. S. Arruda would then face years of difficult rehabilitation. His is the tale of many a political prisoner; but, fortunate to escape with his life, he has ever since borne witness against the oppression, corruption, and brutality of authoritarian regimes, their supporters, and their protectors the world over."-Ralph Della Cava, Columbia University "A Mother's Cry is the story of a Brazilian mother who, while living in the United States in the 1960s, learns by mail of her son's kidnapping by agents of Brazil's military regime. Without immediate means to locate her son, there is 'only' his grandmother in Brazil to initially confront the dictatorship's atrocity establishment. The stuff of a great film, A Mother's Cry juxtaposes their efforts to secure the young man's release with his strategies for surviving brutalizing physical and potentially spirit-breaking torture. This great book joins the yet unconnected literatures on human agency, big and small, that run from the Holocaust, to Argentina's mothers and grandmothers of the Plaza de Mayo, to Cambodian survivors of S-21 prison, to recent accounts of CIA rendition victims. This impressive book is must reading."-Martha K. Huggins, Tulane University