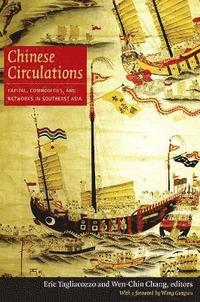 "On the whole, this well-written book will be an important reference not only to those who are interested in Sino-Southeast Asian studies, but will also attract readers exploring the historical development of globalization, particularly from the perspective of how commodity, information, capital and human beings have been circulating and intertwining together for many centuries. Moreover, I am confident that this book will have particular value given the increased interest in studying China's rise at present, on the basis of enormous amounts of exported commodities and millions of emigrants, which has affected and will further affect Southeast Asia and the wider world." -- Li Minghuan * Asian Anthropology * "This impressive collection of research papers is a major contribution to recent efforts to break down a dysfunctional barrier between the study of the history of China and that of the history of Southeast Asia....So we have here an excellent big volume that gives much food for thought and that contributes very substantially to our understanding of the multiple circulations of people and commodities that made the early modern world." -- John E. Wills Jr. * Journal of Economic History * "[T]his book is a relevant and valuable read for scholars and advanced students of not only Chinese and Southeast Asian studies, but also of global, economic, environmental, diaspora and socio-political histories. By combining the usually disparate sub-fields of Southeast Asian studies-the wide range of Asian and European languages alone required to tackle primary sources renders any kind of regional expertise near impossible-and linking them with the twisted strands of Chinese commercial activity, this volume is reminiscent of Silk Road studies in its scope and richness. The multi-dimensional, diverse, yet mutually informed perspectives offered by this book are perhaps its most significant contribution, and this is precisely what an edited volume such as this is supposed to achieve." -- Karen M. Teoh * Journal of International and Global Studies * "Once in a while some groundbreaking efforts on regional studies are carried out to cheer the hearts of the specialists and general readers. Chinese Circulations falls into this mould and contributes significantly to the unraveling of the multifaceted maritime and overland trade and exchanges between China and Southeast Asia during the past few centuries." -- Voon Phin Keong * China Review * "[The] essays . . . form a composite picture of the China trade and its effects on Southeast Asian societies that covers a wide swathe of the past and throws light on present relations. . . . This high-quality collection widens the understanding of Southeast Asia and reminds us of the weakness of the nation-state approach by being willing to transcend (or ignore) state borders, Skinnerian macroregions, or ethnic boundaries. . . ." -- Mary Somers Heidhues * Asian Studies Review * "This is a substantive volume ... that, in the best revisionist tradition, forces historians, anthropologists, sociologists, economists, and others to reevaluate the power, influence, and dominance of local Southeast Asian agencies against the earlier proposals of Chinese and Western predominance of overseas and regional trade after 1600. ... [T]his book should be mandatory reading among scholars and graduate students who specialize in the diverse aspects of Southeast Asian, Chinese, and colonial-era history, and also those who variously study diasporas, servitude, immigration, and economic, maritime, and borderlands topics. As noted above, the book has great importance in its potential to allow scholars and diplomats to draw on the past to envision China's future relationships within Asia and beyond." -- Kenneth R. Hall * China Review International * "This collection of essays offers the most comprehensive and updated examination of the flow of commodities, capital, and p

Eric Tagliacozzo is Associate Professor of History at Cornell University. He is the author of Secret Trades, Porous Borders: Smuggling and States Along a Southeast Asian Frontier and co-editor of The Indonesia Reader: History, Culture, Politics, also published by Duke University Press. Wen-Chin Chang is an Associate Research Fellow at the Center for Asia-Pacific Area Studies at the Academia Sinica in Taiwan.