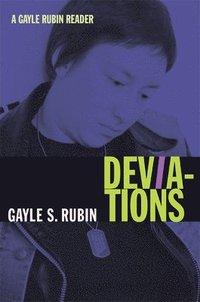 av Gayle S Rubin
(1 röst)
Häftad Engelska, 2011-11-28
336
Köp
Spara som favorit
Finns även som
Visa alla 2 format & utgåvor
Deviations is the definitive collection of writing by Gayle S. Rubin, a pioneering theorist and activist in feminist, lesbian and gay, queer, and sexuality studies since the 1970s. Rubin first rose to prominence in 1975 with the publication of "The Traffic in Women," an essay that had a galvanizing effect on feminist thinking and theory. In another landmark piece, "Thinking Sex," she examined how certain sexual behaviors are constructed as moral or natural, and others as unnatural. That essay became one of queer theory's foundational texts. Along with such canonical work, Deviations features less well-known but equally insightful writing on subjects such as lesbian history, the feminist sex wars, the politics of sadomasochism, crusades against prostitution and pornography, and the historical development of sexual knowledge. In the introduction, Rubin traces her intellectual trajectory and discusses the development and reception of some of her most influential essays. Like the book it opens, the introduction highlights the major lines of inquiry pursued for nearly forty years by a singularly important theorist of sex, gender, and culture.
Visa hela texten

"This book brings together a canonical collection of her writing, but it is more than a reader: she rewrites the genealogy of sexuality studies, giving us a precise intellectual history of sexuality studies that recognises the pivotal role played by academic homosexuals other than the now-feted and individuated Michel Foucault. . . . [I]t is clarifying to read Rubin's analyses, still germane, direct and sharp after all these years. She is alert to nuances in the social field, keen to represent the intersectionality of issues around sex, and judiciously observant of any nexus of inequality." - Sally R. Munt, Times Higher Education Supplement "Gayle S. Rubin has had an incalculable impact on the study of gender and sexuality over the past 35 years. Rubin's work changed the very language and vocabulary with which we discuss sexuality and gender. . . . It is fitting that a scholar of Gayle S. Rubin's stature has finally been rewarded with a comprehensive collection of her most influential essays. While Deviations: A Gayle Rubin Reader will please seasoned scholars of queer theory and gay and lesbian studies with its first ever assemblage of Rubin's most significant work, I believe that the collection will most benefit those who are just making their first steps into the study of queer culture." - Chase Dimock, Lambda Literary Review "Finally: a collection of Gayle Rubin's writings. It is long overdue and sorely needed. . . . For decades, her works appeared in scholarly journals and small-press publications. This collection includes a dozen of her already published pieces, some updated with thoughtful afterwords. She truly has something to say, not only about women and lesbian culture, but (from her unique and insightful perspective) about the sexual crisis America now faces." - David Rosen, The Brooklyn Rail "The definitive collection of Gayle Rubin's work is now available. . . . Deviations offers up articles that shaped the thinking of the modern feminist and LGBT movements, while contextualizing the gradual institutionalization and canonization of sexuality studies. In providing the opportunity to think through the history of American feminism, including the racialization of feminist debates on sexuality, Deviations provides an impetus for 'thinking sex' even more critically." - Svati P. Shah, Women's Review of Books "Foundational essays and commentary from America's preeminent queer feminist intellectual; a must-have for any scholar and every library."-Esther Newton, author of Margaret Mead Made Me Gay: Personal Essays, Public Ideas "Gayle S. Rubin has been breaking new intellectual ground around gender and sexuality for almost four decades. This collection of essays lets us see in one place the breadth, depth, and profound originality of her thinking. It's a wonder to behold. As I reread some familiar pieces and encountered some new ones, I was reminded how much I am in her debt."-John D'Emilio, co-author of Intimate Matters: A History of Sexuality in America "It is rare to find an intellectual who founded an entire field of sexuality studies, whose theoretical contributions have been so far-reaching, and who continues to make rich, surprising, and singular interventions. These are the essays that riveted generations and claim our attention time and again. Gayle S. Rubin gives us the material life of sexual categories, lucid and careful argumentation, extraordinary and unprecedented archives. This brilliant collection is a gift for anyone who wants to follow the formidable trajectory of the most exacting and influential intellectual of sexuality studies."-Judith Butler, Maxine Elliot Professor, Rhetoric and Comparative Literature, University of California, Berkeley "The essays in Deviations cover a tightly meshed set of concerns in an extraordinarily provocative manner. Whether Gayle S. Rubin writes about antiporn politics, lesbian literary histories,

Gayle S. Rubin is Associate Professor of Anthropology, Women's Studies, and Comparative Literature at the University of Michigan.