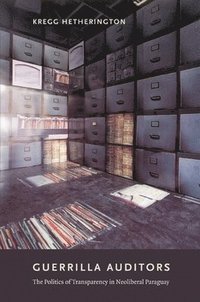 The Politics of Transparency in Neoliberal Paraguay

av Kregg Hetherington
Häftad Engelska, 2011-09-14
279
Köp
Spara som favorit
Skickas inom 7-10 vardagar.
Fri frakt inom Sverige för privatpersoner.
Finns även som
Visa alla 2 format & utgåvor
Guerrilla Auditors is an ethnographic account of the rise of information, transparency, and good governance in the post-Cold War era, and the effects of these concepts on Paraguay's transition to democracy. Kregg Hetherington shows that the ideal of transparent information, meant to depoliticize bureaucratic procedures, has become a battleground for a new kind of politics centered on legal interpretation and the manipulation of official documents. In late-twentieth-century Paraguay, peasant land politics moved unexpectedly from the roads and fields into the documentary recesses of state bureaucracy. When peasants, bureaucrats, and development experts encountered one another in state archives, conflicts ensued about how bureaucracy ought to function, what documents are for, and who gets to narrate the past and the future of the nation. Hetherington argues that Paraguay's neoliberal democracy is predicated, at least in part, on an exclusionary distinction between model citizens and peasants. Despite this, peasant activists have found ways to circumvent their exclusion and in so doing question the conceptual foundations of international development orthodoxy.
Visa hela texten

"Guerrilla Auditors is a pathbreaking ethnography of peasant struggle in Paraguay. ... The book develops new ways of thinking about an older issue in Latin America: the rural peasantry and the struggle for livelihoods, rights, and survival. ... This work is a must-read for students of Latin American politics, social movements, and the state." -- Bret Gustafson * The Americas * "Guerilla Auditors is a much-needed contribution to the study of Paraguayan politics. Hetherington has chosen a very important topic in an understudied country. The history of Paraguay's democratic transition is both opaque and highly politicized, and Hetherington passes through it with skill and nuance, drawing freely from the ethnography of campesino settlements and state archives and the history of land tenure and national politics." -- Warren M. Thompson * Social Forces * "Hetherington's book is a gem, and there are simply too many threads one could pick up and follow to broader and interesting implications." -- Manuel Balan * Latin American Research Review * "Kregg Hetherington's elegant ethnography makes important interventions into the anthropological scholarship on documents, the political anthropology of the state, and literatures on land reform and neoliberalism in Latin America. He brings together a deeply contextualized examination of land reform in post-Stroessner Paraguay with a theoretically and ethnographically rich study of the emerging politics of transparency among both urban elites and rural campesinos.... Hetherington writes beautifully.... Guerrilla Auditors thus not only makes important contributions to the ethnographic study of power, law, bureaucracy, and politics but offers much for readers interested in an engaged anthropology." -- Heath Cabot * PoLAR * "Kregg Hetherington's highly original account of the rise of information and transparency in the governance of Paraguay points to a new kind of struggle and one that political scientists wedded to old categories and classes would do well to consider.... This book should become essential reading on modern politics courses, highlighting the new forms of contestation that are shaping Latin America's globalised future." -- EC * The Latin American Review of Books * "Guerrilla Auditors is a fine refutation of certain stances in global NGO and academic arguments (what he terms the "new democrats"). . . . Guerrilla Auditors provides us with a rich account of another, important theme: the constitutive cultural power of bureaucratization, such as the highly valued possession of original documents on physical paper, and not copies, in the world of ostensibly non-bureaucrats, peasants within a state society." -- Josiah Heyman * Anthropological Quarterly * "Guerilla Auditors is a superb deep ethnography of development that excavates how land politics and the technologies of "good governance" collude to produce campesinos as firmly outside of proper democratic society in post-Stroessner Paraguay.... Hetherington's latest is necessary reading for students and scholars of development, Paraguay and Latin American populism alike." -- Jennifer Tucker * AmeriQuests * "Hetherington argues that Paraguayan neoliberalism is premised on an exclusionary distinction between modern citizens and backward peasants, but his analysis could benefit from a deeper consideration of the class divisions that are reshaping Paraguayan society.... [T]he book is a well-written, insightful study of an underresearched Latin American country, and it should be read by social scientists, development practitioners, and area studies specialists." -- Lesley Gill * American Historical Review * "Understanding that property and the neoliberal project of transparency rest on 'paperwork,' Kregg Hetherington brilliantly deconstructs the politics of creating documents. His astute, closely observed, and entertaining study is radical

Kregg Hetherington is Assistant Professor in the Department of Sociology and Social Anthropology at Dalhousie University in Halifax, Nova Scotia.