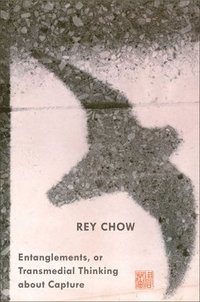 Entanglements, or Transmedial Thinking about Capture

Entanglements, or Trans-Medial Thinking About Capture

av Rey Chow
Häftad Engelska, 2012-04-11
219
Köp
Spara som favorit
Finns även som
Visa alla 1 format & utgåvor
How might the pornographic be associated with Brecht's and Benjamin's media theories? How are Foucault's and Deleuze's writings on visibilities "postcolonial"? What happens when Ranciere's discussions of art are juxtaposed with cultural anthropology? What does a story by Lao She about collecting reveal about political collectivism in modern China? How does Girard's notion of mimetic violence speak to identity politics? How might Arendt's and Derrida's reflections on forgiveness be supplemented by a film by Lee Chang-dong? What can Akira Kurosawa's films about Japan say about American Studies? How is Asia framed transnationally, with what consequences for those who self-identify as Asian? These questions are dispersively heterologous yet mutually implicated. This paradoxical character of their discursive relations is what Rey Chow intends with the word "entanglements," by which she means, first, an enmeshment of topics: the mediatized image in modernist reflexivity; captivation and identification; victimhood; the place of East Asia in globalized Western academic study. Beyond enmeshment, she asks, can entanglements be phenomena that are not defined by affinity or proximity? Might entanglements be about partition and disparity rather than about conjunction and similarity? Across medial forms (including theater, film, narrative, digitization, and photographic art), and against more popular trends of declaring things and people to be in flux, Chow proposes conceptual frames that foreground instead aesthetic, ontological, and sentient experiences of force, dominance, submission, fidelity, antagonism, masochism, letting-go, and the attraction to self-annihilation. Boundary, trap, capture, captivation, sacrifice, and mimesis: these riveting terms serve as analytic pressure points in her readings, articulating perversity, madness, and terror to pursuits of freedom.
Visa hela texten

"Whatever concepts Rey Chow writes about, whether it is capture, the postcolonial, or sacrifice, she always manages to produce a positive sense about them. Not 'positive' in the convention of spin that nowadays supports almost every cultural event or object; Chow is positive because she intelligently entangles each of her concepts with ideas that one may not expect to find together, thereby producing a kind of dynamic surprise: pornography and reflexivity, or mimesis and victimhood, are good examples. Chow's book, Entanglements, or Transmedial Thinking about Capture (2012), is an uplifting experience." - Greg Wilding, M/C Reviews: Culture and the Media "Few authors master the art of enticing readers with imaginative titles, and then fulfill their promises. Few manage to make a collection of disparate essays more attractive than a monograph. There is nothing really disparate, since Rey Chow is in the middle of it all. And she knows so much, and brings it all together: modernism, art, transnationalism, philosophy-she makes it all coherent and important. At the heart of the book is an ongoing, labyrinthine, but deeply engaging discussion and demonstration of montage-cutting and re-assembling as an aesthetic and ethical principle; the one through the other, and back."-Mieke Bal, author of Of What One Cannot Speak: Doris Salcedo's Political Art "In Rey Chow's own terms, entanglements are 'the linkages and enmeshments that keep things apart; the voidings and uncoverings that hold things together.' Chow's entanglements are prefaced by her rare command of and facility with the literature of contemporary critical theory. In turning her incisive scrutiny to a broad range of contemporary artifacts, she exemplifies the currency of theoretical rigor amid cultural conditions of radical new alignments and medial reconfigurations."-Henry Sussman, author of Around the Book: Systems and Literacy "Rey Chow is a superb stager of theoretical scenes. To see the film Lust, Caution, for example, grow ever more radiant as it is approached through a series of seductive theoretical frames is to find yourself in the presence of a dramatist of rare intellectual power. Chow's performances leave you 'captivated'-one of the theoretical terms she develops so unpredictably. I can't think of another academic who's been so impious or so enticing on the subject of domination and submission. It's a show you can't miss."-Bruce Robbins, author of Perpetual War: Cosmopolitanism from the Viewpoint of Violence "These lucid, beautifully astute, and critically persuasive meditations and mediations open the folds, tangles, and paradoxical reversals lurking inside what we mean and might mean by victimhood, enslavement, capture, and captivation; the underside of Christian forgiveness, coloniality, and 'life'; and the outside of the human, visibility, utopianism, and the indistinctness of art and non-art. Articulated in relation to the writings of a swath of European figures-Brecht, Benjamin, Ranciere, Derrida, Agamben, Foucault, Deleuze, and others-Rey Chow's thought is wonderfully educative and provocative."-Brian Rotman, author of Becoming Beside Ourselves: The Alphabet, Ghosts, and Distributed Human Being "[Chow's] sharp analysis of the politics of contemporary culture, including the often surprising twists of her conclusions, makes every effort to follow her theory-saturated arguments worthwhile. . . . Her work on entanglements . . . reaches far beyond her own, carefully chosen examples. It can theoretically inform the study of a broad range of mediatized stagings, including our entrapments in harmful cultural patterns that have led to the present planetary environmental degradation." -- Greg Wilding * M/C Reviews * Rey Chow's work invariably combines complex issues in unusual ways to produce often-surprising conclusions. Her readings often combine quite a few already complicated issues and sets of questions in

Rey Chow is Anne Firor Scott Professor of Literature at Duke University. She is the author and editor of numerous books, including The Age of the World Target, also published by Duke University Press.