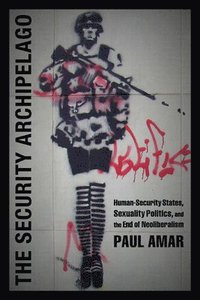 Human-Security States, Sexuality Politics, and the End of Neoliberalism

"Paul Amar's The Security Archipelago has received (well-deserved) attention for its interventions into political science discussions of security, into queer studies discussions of sexuality, and within the general academic humanities for its arguments concerning a transition from neoliberalism to human security. What Amar's The Security Archipelago proposes is nothing less than the thesis that neoliberal forms of governance in the Global South, which feature market legitimation and consumer subjectivity, have been overcome by forms of human security governance. ... Amar's work gives Latin Americanists a way into discussions of sexuality and race which don't collapse into the dreaded identity politics." -- Brian Whitener * Publica Comun * "[W]ide-ranging case studies ground the book's critical security analysis in sites of struggle, making important contributions to the understanding of the spread of urban violence and progressive social policy in Brazil and the rise of left-right coalitions in Islamic urban planning and revolutionary uprisings in Egypt. ... Amar's book offers a two-pronged challenge to dominant theories of neoliberalism." -- Neel Ahuja * boundary 2 * "The book is smart, creative, and deserves to be widely read. . . . [A]dvanced students and scholars of the anthropology of policing, governmentality, sexual politics, the rising Global South, Brazil, or Egypt, will find The Security Archipelago to be a bold and intellectually provocative contribution to these fields of inquiry." -- Avram Bornstein * American Ethnologist * "The Security Archipelago is a prescient interdisciplinary analysis that anticipates the Arab rebellions in Cairo and locates them in a longer history of what Amar calls 'human security states.' ... The Security Archipelago helps us understand how both visions for the global South employ a discourse of human security." -- Alex Lubin * American Quarterly * "[T]his is an ambitious text, and one that offers much for scholars to work with and on which they may build. Amar has articulated a generative framework for thinking about the ways in which political formations develop and spread. Furthermore, he has linked a variety of social, cultural, and economic phenomena to processes of governance and securitization in novel ways that may be productively mobilized in future scholarship." -- Claire Panetta * Journal of Latin American and Caribbean Anthropology * "Through the lenses of the intensely overlapping realms of morality and urban politics, The Security Archipelago provides a new map that refigures how rule works and how it fails to work. ... Amar poses the labor of the activist as a form of theorization. Dissidents and revolutionaries are, after all, the social theorists whomthe experts must finally listen to, as Amar does so carefully and attentively in this work." -- Sherene Seikaly * Journal of Middle East Women's Studies * "The book puts forth numerous ground-breaking arguments that will enable its readers to rethink the very nature of contemporary neoliberal governance, humanitarianism, and the relation between the global North and global South. It speaks very clearly to contemporary political struggles surrounding state security logics, militarism, sexuality, and human trafficking, but in ways that are entirely unanticipated." -- Omnia El Shakry * GLQ * "Amar traces the contradictory contours of state power, more interested in its own survival than that of its citizens. Especially for scholars of the changing global status of gender and sexuality, this is a book which expands the scope of the field." -- Constance G. Anthony * New Political Science * "Amar's analysis of the politics and culture of the human-security state provides an alternative and declining history of neoliberalism. . . . He pushes critical security studies forward when he questions whether decisions to disregard the Global South contri

Paul Amar is Associate Professor of Global Studies at the University of California, Santa Barbara. A political scientist and anthropologist, he has worked as a journalist in Egypt, a police reformer in Brazil, and a United Nations conflict resolution and economic development specialist.