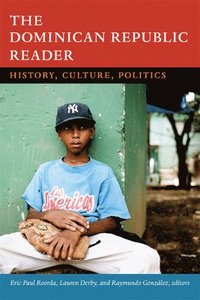 av Eric Paul Roorda, Lauren H Derby, Raymundo Gonzalez
Häftad Engelska, 2014-05-23
279
Köp
Spara som favorit
Skickas inom 10-15 vardagar.
Fri frakt inom Sverige för privatpersoner.
Kan levereras innan jul!
Finns även som
Visa alla 2 format & utgåvor
Despite its significance in the history of Spanish colonialism, the Dominican Republic is familiar to most outsiders through only a few elements of its past and culture. Non-Dominicans may be aware that the country shares the island of Hispaniola with Haiti and that it is where Christopher Columbus chose to build a colony. Some may know that the country produces talented baseball players and musicians; others that it is a prime destination for beach vacations. Little else about the Dominican Republic is common knowledge outside its borders. This Reader seeks to change that. It provides an introduction to the history, politics, and culture of the country, from precolonial times into the early twenty-first century. Among the volume's 118 selections are essays, speeches, journalism, songs, poems, legal documents, testimonials, and short stories, as well as several interviews conducted especially for this Reader. Many of the selections have been translated into English for the first time. All of them are preceded by brief introductions written by the editors. The volume's eighty-five illustrations, ten of which appear in color, include maps, paintings, and photos of architecture, statues, famous figures, and Dominicans going about their everyday lives.
Visa hela texten

"With its broad-minded collection ofdocuments, the reader is a welcome and well-crafted addition to a bookshelf of English-language works on the Dominican Republic and is certain to be just as valuable in the classroom." -- Anne Eller * Hispanic American Historical Review * "The Dominican Republic Reader represents the most thought-provoking and interdisciplinary volume offered thus far to an English-speaking [audience]. It is a must for any university library, as well as a much-needed addition to any class dedicated to the study of Hispaniola, the Spanish Caribbean, or Dominicans in the United States." -- Juan Jose Ponce-Vazquez * The Black Scholar * "A student of Caribbean history or culture, or a student of Latin America, coming to this book would leave with a broad sense of what the Dominican Republic is, what its major historical and cultural issues are and have been, and how its current democracy has been achieved. That is not a bad achievement for a book clearly aimed at an undergraduate reader and held together with essays that illuminate the texts presented to its audience." -- F.S.J. Ledgister * Caribbean Quarterly * "The Dominican Republic Reader is a well-crafted study that will engage readers. The documents, essays, and other vignettes are representative of the Dominican Republic's rich and colorful history and culture." -- Michael R. Hall * The Latin Americanist * "Curious travelers, study-abroad students and faculty, and Latinamericanists generally will find this book to be a solid departure point to understand issues of race, religion (the Virgen of Altagracia, syncreticism), music, gendered roles (machismo and marianismo), and the turbulent imprint of caudillos on the evolution of the Dominican Republic. Over 150 suggested readings point the way to further explore an island in the Caribbean whose history, culture and politics have much to say about the human condition there and elsewhere." -- Joseph Scarpaci * Journal of Latin American Geography * "Roorda, Derby, and Gonzalez use source materials from onsite actors/observers, government officials, writers, and intellectuals (Dominican and otherwise) to add an intimacy and sense of familiarity to the book's narrative. They blend and merge important and formative events and actors that make up the formal history of the Dominican Republic with accounts designed to help readers understand the Dominican character and bases for social norms. The dozens of essays and accounts (some from contributors more familiar to casual readers, some less familiar), with an appropriate apportioning of emphases on nations influential in Dominican affairs (such as the US), complete a historiography that is both challenging and insightful. In a collection of different tiles in the Dominican mosaic, nothing is really trivial here. Highly Recommended. Upper-level undergraduates and above." -- W. J. Nelson * Choice * "The best available collection of writing in English for anyone wanting a broad and varied introduction to Dominican history, politics and culture. Very much a book for dipping into, which works well for the appealingly diverse sections on religion, popular culture and the Dominican diaspora but means the history sections, necessarily lacking a consistent narrative, work better for those with some prior knowledge of the country's past." * Rough Guide to the Dominican Republic *

Eric Paul Roorda is Professor of History at Bellarmine University in Louisville, Kentucky. He is the author of The Dictator Next Door: The Good Neighbor Policy and the Trujillo Regime in the Dominican Republic, 1930-1945, published by Duke University Press. Lauren Derby is Associate Professor of History at the University of California, Los Angeles. She is the author of The Dictator's Seduction: Politics and the Popular Imagination in the Era of Trujillo, also published by Duke University Press. Raymundo Gonzalez is a researcher at the Dominican National Archives and Social Science Coordinator for the Dominican Ministry of Education. He teaches at the Universidad Iberoamericana and the Instituto Filosofico Pedro Francisco Bono, both in Santo Domingo.