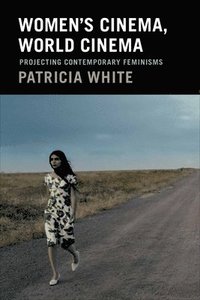 av Patricia White
Häftad Engelska, 2015-02-20
259
Köp
Spara som favorit
Finns även som
Visa alla 2 format & utgåvor
In Women's Cinema, World Cinema, Patricia White explores the dynamic intersection of feminism and film in the twenty-first century by highlighting the work of a new generation of women directors from around the world: Samira and Hana Makhmalbaf, Nadine Labaki, Zero Chou, Jasmila Zbanic, and Claudia Llosa, among others. The emergence of a globalized network of film festivals has enabled these young directors to make and circulate films that are changing the aesthetics and politics of art house cinema and challenging feminist genealogies. Extending formal analysis to the production and reception contexts of a variety of feature films, White explores how women filmmakers are both implicated in and critique gendered concepts of authorship, taste, genre, national identity, and human rights. Women's Cinema, World Cinema revitalizes feminist film studies as it argues for an alternative vision of global media culture.
Visa hela texten

"Women's Cinema, World Cinema is another smart, deep and open-hearted achievement I will choose to live beside. White lets us know, in this collection of essays, investigations, speculations, gossip and political insights that feminist cinema is now, in fact, a global event that defies national boundary.... It's a book that succeeds in expanding the reader's consciousness with wit and bold intellectual drive." -- Sarah Schulman * Lambda Literary Review * "Bringing these excellent, inspiring filmmakers into sharp focus, this comprehensive study is smoothly organized and could even serve as a text for a semester-long course on 21st-century feminist cinema. Boldly illustrated and written in a clear, accessible style, this will be a key resource for those interested in contemporary film history, theory, and criticism.... Highly recommended. All readers." -- G. A. Foster * Choice * "Women's Cinema, World Cinema is a substantial victory in terms of scholarship and the ripple effect it could have on the far-flung communities of people who care about women's cinema." -- Erin Trahan * Women's Review of Books * "With her brilliantly clear-sighted study,White bestows on her readers the right not to be defensive about female film authorship quantitatively any longer. Her work argues, instead, that 'women's cinema' be understood, valued, and defended qualitatively as the key space of feminist film culture-as a 'discursive terrain . . . still very much at stake' (3)." -- Catherine Grant * Film Quarterly * "A must-read for programmers, critics, teachers, and all viewers.... It's both a brilliant reading of some of the most inventive current filmmakers... and an insightful lowdown of changes in film production, exhibition and reception over the last decade." -- Sophie Mayer * British Film Institute * "White's book is one of 2015's major feminist works because of its demonstration of feminism as a process defying stereotypes and driving continual cultural change-'post' only in its capacity to overtake itself." -- Leanne Bibby * Year's Work in Critical and Cultural Theory * "White's monograph is undoubtedly an invaluable addition to the discussion of women's cinema. White's most far-reaching contribution to both women's and film studies is her carefully crafted and detailed exploration of the geopolitics of global women's cinema. Her case studies convey the struggle between the personal and the global, and the national and the international, showing multiple pathways of engagement with these issues, and the close links between distribution, exhibition and evaluation within the US art house and international film festival spheres." -- Judith Rifeser * Film-Philosophy * "White has dealt with material that is dauntingly unwieldy and has provided the great scholarly service of making it far less so for others. She has provided a wonderful 'map', one that enables an informed and focused engagement with the very best of contemporary women's cinema from the Global South. Her book makes a very strong case for the importance of women's cinema as world cinema. I recommend it most warmly." -- Mette Hjort * Cultural Studies Review * "A must-read book for a wide variety of audiences. White's writing, rich and densely coded, avoids overly specialized terminology . . . . Reading this book feels like a comprehensive experience in learning how to read the world differently." -- Maggie Hennefeld * Cultural Critique *

Patricia White is Professor of Film and Media Studies at Swarthmore College. She is the author of Uninvited: Classical Hollywood Cinema and Lesbian Representability, coauthor of The Film Experience, and coeditor of Critical Visions in Film Theory. She has worked extensively with Women Make Movies and the journal Camera Obscura: Feminism, Culture, and Media Studies.