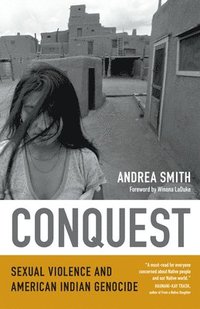 av Andrea Smith
Häftad Engelska, 2015-04-24
276
Köp
Spara som favorit
Finns även som
Visa alla 1 format & utgåvor
In this revolutionary text, prominent Native American studies scholar and activist Andrea Smith reveals the connections between different forms of violence-perpetrated by the state and by society at large-and documents their impact on Native women. Beginning with the impact of the abuses inflicted on Native American children at state-sanctioned boarding schools from the 1880s to the 1980s, Smith adroitly expands our conception of violence to include the widespread appropriation of Indian cultural practices by whites and other non-Natives; environmental racism; and population control. Smith deftly connects these and other examples of historical and contemporary colonialism to the high rates of violence against Native American women-the most likely to suffer from poverty-related illness and to survive rape and partner abuse. Smith also outlines radical and innovative strategies for eliminating gendered violence.
Visa hela texten

"A must-read for everyone concerned about Native people and our Native world." -- Haunani-Kay Trask, author of From a Native Daughter: Colonialism and Sovereignty in Hawai'i "Conquest is the book Aboriginal women have been waiting for. Andrea Smith has not only meticulously researched the place of rape and violence against Indigenous women in the colonial process, but she is the first to fully articulate the connections between violence against the earth, violence against women, and North America's terrible inclination toward war." -- Lee Maracle, author of I Am Woman: A Native Perspective on Sociology and Feminism "Andrea Smith has no fear. She challenges conventional activist thinking about global and local, sexism and racism, genocide and imperialism. But what's more, in every chapter she tries to answer the key question: What is to be done? Conquest is unsettling, ambitious, brilliant, disturbing: read it, debate it, use it." -- Ruth Wilson Gilmore, The Graduate Center, City University of New York "Andrea Smith brilliantly weaves together feminist explanations of violence against Native women, the historical data regarding colonialism and genocide, and a strong critique of the current responses to the gender violence against women of color ... Conquest is one of the most significant contributions to the literature in Native Studies, feminist theory, and social movement theory in recent years." -- Beth E. Richie, author of Compelled to Crime: The Gender Entrapment of Battered Black Women "Whether it is our reliance on the criminal justice system to protect women from violence or the legitimacy of the U.S. as a colonial nation-state, Andrea Smith's incisive and courageous analysis cuts through many of our accepted truths and reveals a new way of knowing rooted in Native women's histories of struggle. More than a call for action, this book provides sophisticated strategies and practical examples of organizing that simultaneously take on state and interpersonal violence. Conquest is a must-read not only for those concerned with violence against women and Native sovereignty, but also for antiracist, reproductive rights, environmental justice, antiprison, immigrant rights, and antiwar activists." -- Julia Sudbury editor of Global Lockdown: Race Gender and the Prison-Industrial Complex "Give thanks for the very great honor of listening to Andrea Smith. This book will burn a hole right through your mind with its accurate analysis and the concise compilation of information that makes it the first of its kind. Conquest is not only instructive, it is healing. I want every Indian I know to read it." -- Chrystos, artist, poet, and activist "Conquest radically rethinks the historical scope and dimensionality of 'sexual violence,' a historical vector of bodily domination that is too often reduced to universalizing-hence racist-narratives of gendered oppression and resistance. Offering a breathtaking genealogy of white supremacist genocide and colonization in North America, this book provides a theoretical model that speaks urgently to a broad continuum of political and intellectual traditions. In this incisive and stunningly comprehensive work, we learn how the proliferation of sexual violence as a normalized feature of modern Euro-American patriarchies is inseparable from violence against Indigenous women, and women of color. In Conquest, Andrea Smith has presented us with an epochal challenge, one that should productively disrupt and perhaps transform our visions of liberation and radical freedom." -- Dylan Rodriguez, University of California, Riverside "Conquest is not for those who flinch from an honest examination of white supremacist history, or who shy away from today's controversies in the reproductive health and anti-violence movements. This book is a tough, thoughtful, and passionate analysis of the colonization of America and the resistance of Indigenou

Andrea Smith is Associate Professor of Ethnic Studies and Media and Cultural Studies at the University of California, Riverside. She is the author of Native Americans and the Christian Right: The Gendered Politics of Unlikely Alliances and coeditor of Theorizing Native Studies, both also published by Duke University Press.