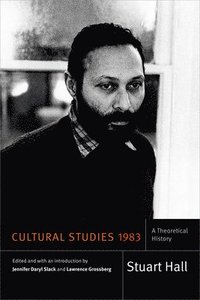 av Stuart Hall, Jennifer Daryl Slack, Lawrence Grossberg
Inbunden Engelska, 2016-10-17
909
Köp
Spara som favorit
Skickas inom 10-15 vardagar.
Fri frakt inom Sverige för privatpersoner.
Finns även som
Visa alla 2 format & utgåvor
The publication of Cultural Studies 1983 is a touchstone event in the history of Cultural Studies and a testament to Stuart Hall's unparalleled contributions. The eight foundational lectures Hall delivered at the University of Illinois in 1983 introduced North American audiences to a thinker and discipline that would shift the course of critical scholarship. Unavailable until now, these lectures present Hall's original engagements with the theoretical positions that contributed to the formation of Cultural Studies. Throughout this personally guided tour of Cultural Studies' intellectual genealogy, Hall discusses the work of Richard Hoggart, Raymond Williams, and E. P. Thompson; the influence of structuralism; the limitations and possibilities of Marxist theory; and the importance of Althusser and Gramsci. Throughout these theoretical reflections, Hall insists that Cultural Studies aims to provide the means for political change.
Visa hela texten

"One of the most important cultural studies books to be published in recent (or even distant) memory. . . . The long wait has been worth it, and 1983 arrives at a moment when we desperately need it. . . . Hall didn't intend these lectures to be a call to arms for 2017 and beyond. But we can-and should-still read them that way." -- Gilbert B. Rodman * Cultural Studies * "Given at the University of Illinois in 1983, the lectures provide a fascinating introduction to the theoretical questions with which cultural studies was grappling. . . . A compelling and essential introduction to both the strengths of cultural studies as a discipline and its evolution during that time." -- Rjurik Davidson * Thesis Eleven * "The late Stuart Hall was more than an intellectual giant of postwar Britain. He was the great illuminator, whose far-reaching insights into how the world is constructed show us why cultural studies is not about the manners learned from the masters, but a way of examining and understanding social reality as made by the people themselves. Argumentative, diagnostic, witty, and learned, the series of scintillating lectures contained in this volume presents Hall at the height of his fearless and generous scholarly powers, offering not only a history of cultural studies but a theoretical and politically engaged reading of our unequal centuries." -- Okwui Enwezor * Artforum * "Cultural Studies 1983 performs two important tasks: it recreates a sense of the spark that kindled a moment long remembered in Cultural Studies and related fields; more importantly, it offers access into an incredibly rich body of thought that has as much to teach today as it did three and a half decades ago.... Thanks to Cultural Studies 1983 and Duke University Press's Stuart Hall: Selected Writings series, we have a new trove of proven tools when perhaps we need them most." -- John Munro * History * "Hall's work has become especially resonant as Britain has voted for a narrower identity and a more isolationist attitude to the rest of the world.... There is a generosity and literary imagination in his writing-a recognition that humans are complex, contradictory creatures shaped by, among other things, what they believe, where they live, how they shop, and who they sleep with." -- Jessica Loudis * The New Republic * "Cultural Studies 1983 is a cogent summation of the most influential modern theories that have grappled with and tried to explain the dynamics of unequal societies and the cultures they produced." -- Shonaleeka Kaul * Frontline * "Hall's metier was to tease out the competing histories, the contradictory political, economic, and social forces condensed within a particular historical moment, an excavation of ideology he called 'conjunctural analysis.' . . . [H]is work is all too timely, for the haphazard project of neoliberalism, justified retroactively by nonsensical appeals to the 'free market,' is as advanced as the decades-long economic decline it magics away with bubbles and rhetoric (GDP balloons; personal wealth stagnates)." -- Michael Robbins * Bookforum * "The collection is inspiring and comprehensive, covering, for example, the birth of Cultural Studies, Marxist structuralism and Hall's crucial post-Gramscian work on hegemony. . . . Hall's collection of lectures is persuasive, galvanising and feels both timeless and timely, despite its posthumous status." -- Sofia Ropek Hewson * LSE Review of Books * "Hall's lectures from 1983 appear to be a peculiar event of appropriation-a fundamental attempt to retain Marx as a nondisposable basis for cultural studies by means of a meticulous, well-informed, and earnest guarding of his heritage from vulgar and reductive misreadings. The volume itself is a praiseworthy enterprise of retaining this hallmark of theoretical history and making accessible at least some of Hall's works, otherwise scattered across less-kn

Stuart Hall (1932-2014) was one of the most prominent and influential scholars and public intellectuals of his generation. He was a prolific writer and speaker and a public voice for critical intelligence and social justice who appeared widely on British television and radio. He taught at the University of Birmingham and the Open University, was the founding editor of New Left Review, and served as the director of Birmingham's Centre for Contemporary Cultural Studies during its most creative and influential decade. Jennifer Daryl Slack is Professor of Communication and Cultural Studies at Michigan Technological University. Lawrence Grossberg is Morris David Distinguished Professor of Communication and Cultural Studies at the University of North Carolina, Chapel Hill.