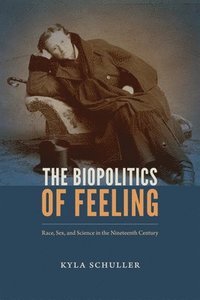 The Biopolitics of Feeling

Race, Sex, and Science in the Nineteenth Century

av Kyla Schuller
Häftad Engelska, 2017-12-22
261
Köp
Spara som favorit
Finns även som
Visa alla 2 format & utgåvor
In The Biopolitics of Feeling Kyla Schuller unearths the forgotten, multiethnic sciences of impressibility-the capacity to be transformed by one's environment and experiences-to uncover how biopower developed in the United States. Schuller challenges prevalent interpretations of biopower and literary cultures to reveal how biopower emerged within the discourses and practices of sentimentalism. Through analyses of evolutionary theories, gynecological sciences, abolitionist poetry and other literary texts, feminist tracts, child welfare reforms, and black uplift movements, Schuller excavates a vast apparatus that regulated the capacity of sensory and emotional feeling in an attempt to shape the evolution of the national population. Her historical and theoretical work exposes the overlooked role of sex difference in population management and the optimization of life, illuminating how models of binary sex function as one of the key mechanisms of racializing power. Schuller thereby overturns long-accepted frameworks of the nature of race and sex difference, offers key corrective insights to modern debates surrounding the equation of racism with determinism and the liberatory potential of ideas about the plasticity of the body, and reframes contemporary notions of sentiment, affect, sexuality, evolution, and heredity.
Visa hela texten

"[Schuller's] terminology here may act as a springboard for additional theorizations of race. . . . An ambitious, conscientious history." -- Joshua Falek * Cultural Studies * "The importance of this book to nineteenth-century studies cannot be understated: it fundamentally rewrites the history of sentimentalism, an affective and cultural formation that dominated norms of comportment and embodiment across the period. . . . " -- Kyla Tompkins * American Quarterly * "The Biopolitics of Feeling takes a refreshingly head-on approach to the historical entanglement of race and sex in the United States. . . Stunningly convincing . . . Readers will find an abundant resource of theoretically informed readings of postbellum and Progressive Era science and literature throughout the study, but they will be also unable to ignore Schuller's urgent warning about feminism's embeddedness in the machinations of biopower." -- Britt Rusert * Catalyst * "Impressibility and sentimentalism combine in this book to form a rubric assessing a broad and fascinating archive. . . . Schuller offers a broad view of how nineteenth-century Americans were given repeated exposure to the logic of impressibility and affective fitness, to the point where both became unconscious components of civic life." -- Sheila Liming * Legacy * "An impressive synthesis of historical and theoretical work. . . . A well-documented critique of society and valuable contribution to scholarship on biopolitics that addresses persistent issues that can spark intellectual discussions. The book would be useful for scholars across disciplines such as Philosophy, Health Studies, Critical Race Studies, Ethnic Studies and Women, Gender and Sexuality Studies." -- Rosemary Onyango * Journal of International Women's Studies *