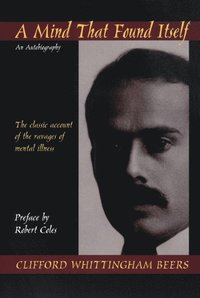 Mind That Found Itself E-bok

av Beers Clifford W Beers
E-bok (PDF - DRM), Engelska, 2014-10-15
419
Ladda ned
Spara som favorit
Laddas ned direkt
Läs i vår app för iPhone, iPad och Android
Finns även som
Visa alla 8 format & utgåvor
At once a classic account of the ravages of mental illness and a major American autobiography, A Mind That Found Itself tells the story of a young man who is gradually enveloped by a psychosis.  His well-meaning family commits him to a series of mental hospitals, but he is brutalized by the treatment, and his moments of fleeting sanity become fewer and fewer. His ultimate recovery is a triumph of the human spirit. The publication of A Mind That Found Itself did for the American mental health movement what Thomas Paines Common Sense did for the American Revolution.  Moreover, it grips the imagination of readers not because it is a document of social reform but because it is a superb narrative. As the distinguished psychiatrist and writer Robert Coles has noted, the book provides the virtues of clinical analysis, as well as personal reminiscence, all rendered with a novelists eye for the particular, for emotional nuance, for chronological progression. . . . Steadily, forthrightly, we come in touch with the nature of delusions and hallucinations: the complex, symbolically charged, nightmarish world of fear, suspicion, irritability and truculence.nbsp;Recovered from his illness, Beers began a lifelong crusade, through the National Committee for Mental Hygiene and the American Foundation for Mental Hygiene, to revolutionize the care and treatment of the mentally ill. The persuasive chronicler of mental illness became a sophisticated, pragmatic organizer and reformer. A Mind That Found Itself was first published in 1908 but remains compelling and clinically accurate-an unforgettable reading experience.
Visa hela texten