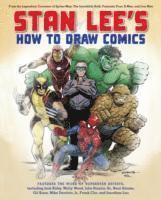 Stan Lee's How to Draw Comics

From the Legendary Creator of Spider-Man, The Incredible Hulk, Fantastic Four, X-Men, and Iron Man

Stan Lee is a legendary American comics writer, editor and the former president and chairman of Marvel Comics. He is the writer of the Spider-Man syndicated newspaper strip, which is the longest running superhero strip and appears in more than 500 newspapers worldwide. He was awarded the National Medal of Arts in November 2008.