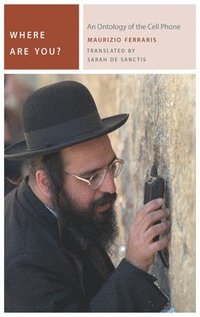 An Ontology of the Cell Phone

av Maurizio Ferraris
Häftad Engelska, 2014-09-01
249
Köp
Spara som favorit
Skickas inom 7-10 vardagar.
Fri frakt inom Sverige för privatpersoner.
Finns även som
Visa alla 1 format & utgåvor
This book sheds light on the most philosophically interesting of contemporary objects: the cell phone. "Where are you?"-a question asked over cell phones myriad times each day-is arguably the most philosophical question of our age, given the transformation of presence the cell phone has wrought in contemporary social life and public space. Throughout all public spaces, cell phones are now a ubiquitous prosthesis of what Descartes and Hegel once considered the absolute tool: the hand. Their power comes in part from their ability to move about with us-they are like a computer, but we can carry them with us at all times-in part from what they attach to us (and how), as all that computational and connective power becomes both handy and hand-sized. Quite surprisingly, despite their name, one might argue, as Ferraris does, that cell phones are not really all that good for sound and speaking. Instead, the main philosophical point of this book is that mobile phones have come into their own as writing machines-they function best for text messages, e-mail, and archives of all kinds. Their philosophical urgency lies in the manner in which they carry us from the effects of voice over into reliance upon the written traces that are, Ferraris argues, the basic stuff of human culture. Ontology is the study of what there is, and what there is in our age is a huge network of documents, papers, and texts of all kinds. Social reality is not constructed by collective intentionality; rather, it is made up of inscribed acts. As Derrida already prophesized, our world revolves around writing. Cell phones have attached writing to our fingers and dragged it into public spaces in a new way. This is why, with their power to obliterate or morph presence and replace voice with writing, the cell phone is such a philosophically interesting object.
Visa hela texten

Ferraris' book does what good philosophy always did: it interprets the world where we live making the mundane critically visible. When most people still assumed that mobile phones would mark the triumph of oral communication, Ferraris took the chance to put his philosophy to test and predict the triumph of writing, over speaking, in the new technological world. Contracts, weddings, and all the other Social Objects-- material products of our ability to write and record-- take the central stage in a philosophical move that gives back to the virtual its reality. For the initiated, Ferraris reopens the debate between Searl and Derrida without the animosity of the original participants, proving that under the discussion there was true substance and that both authors are as relevant today as they were in the early seventies. The book should be an elective reading for iOS and Android fans alike and a required text for philosophers, literary critics and telecommunication engineers. -- -Emanuel Rota * University of Illinois * "Where Are You? An Ontology of the Cell Phone offers an ontology and phenomenology of the cell phone that draws as easily on popular culture and our daily experience of the cell phone, as it does on Ferrari's considerable philosophical culture. In one moment, Ferraris speculates how differently the ending of Dr. Zhivago might have played out in the age of the cell phone, and in the next, argues that the cell phone is the absolute emblem of the age not of the triumph of the image, as has so often been claimed, but of 'the explosion of writing.'" -- -Barbara Spackman * University of California, Berkeley *

Bloggat om Where Are You?

Maurizio Ferraris is Professor of Philosophy at the University of Turin. He is the co-author, with Jacques Derrida, of A Taste for the Secret and the author of Documentality: Why It Is Necessary to Leave Traces (Fordham). Sarah De Sanctis is a professional translator and a Ph.D. student at the London Graduate School, where she specializes in literature and new realism.