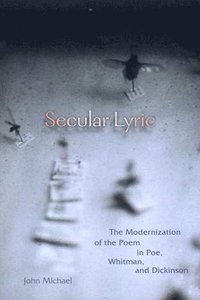 The Modernization of the Poem in Poe, Whitman, and Dickinson

av John Michael
Häftad Engelska, 2018-04-17
299
Köp
Spara som favorit
Skickas inom 10-15 vardagar.
Fri frakt inom Sverige för privatpersoner.
Kan tyvärr inte längre levereras innan jul.
Finns även som
Visa alla 1 format & utgåvor
Secular Lyric interrogates the distinctively individual ways that Poe, Whitman, and Dickinson transformed classical, romantic, and early modern forms of lyric expression to address the developing conditions of Western modernity, especially the heterogeneity of believers and beliefs in an increasingly secular society. Analyzing historically and formally how these poets inscribed the pressures of the modern crowd in the text of their poems, John Michael shows how the masses appear in these poets' work as potential readers to be courted and resisted, often at the same time. Unlike their more conventional contemporaries, Poe, Whitman, and Dickinson resist advising, sermonizing or consoling their audiences. They resist most familiar senses of meaning as well. For them, the processes of signification in print rather than the communication of truths become central to poetry, which in turn becomes a characteristic of modern verse in the Western world. Poe, Whitman, and Dickinson, in idiosyncratic but related ways, each disrupt conventional expectations while foregrounding language's material density, thereby revealing both the potential and the limitations of art in the modern age.
Visa hela texten

Secular Lyric will not only be useful for its provocative arguments about the lyric, and for its investigations of posthumanist materialism in nineteenth-century poetry, but also, one hopes, as a provocation to consider anew two ideas of a secular world. In one, the secular world is a place in which, without an unquestioned, transcendent ground on which to place our views, we are thrown into discussion about goals, effects, benefits, and motives for beliefs and actions. In the other, the secular world is a place of shifting sensations and abutting objects, in which material anonymity is the one absolute truth that can be relied on. * American Literary History Online Review * This book offers a fresh look at the three most significant American poets of the 19th century: Edgar Allan Poe, Walt Whitman, and Emily Dickinson... All readers will find much to consider in this concise and thoughtful book... Highly recommended. * Choice * In this thoughtful and original study John Michael explores the ways in which Poe, Whitman, and Dickinson adapted and re-shaped the lyric in response to the challenges of secular modernity. His book will be of interest not only to those wishing to learn more about these three poets but to those curious about the fate of the lyric in a world increasingly defined by secularism and by all the paradoxes such a development can bring. -- Kerry Larson * University of Michigan *

John Michael is Professor of English and of Visual and Cultural Studies at the University of Rochester where he is also Director of American Studies.

Introduction. The Secularization of the Lyric: The End of Art, a Revolution in Poetic Language, and the Meaning of the Modern Crowd Part I: Edgar Allan Poe 1. Poe's Post-Humanism 2. Poe and the Origins of Modern Poetry: Tropes of Comparison and the Knowledge of Loss Part II: Walt Whitman 3. Whitman's Poetics: Metonymy and the Crowd 4. Whitman and Democracy: The "Withness of the World," the Reader, and the Fakes of Death Part III: Emily Dickinson 5. Emily Dickinson: The Poet as Lyric Reader 6. Dickinson's Dog and the Conclusion Acknowledgments Notes Index