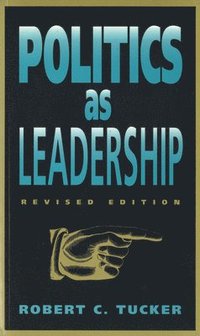 av Robert C Tucker
Häftad Engelska, 1995-09-01
379
Köp
Spara som favorit
Skickas inom 10-15 vardagar.
Fri frakt inom Sverige för privatpersoner.
Robert C. Tucker begins this invaluable book with an analytical look at politics, leadership, and the effect each has on the other. Aligning himself with Plato's view of politics as leadership, Tucker argues that politics is more usefully defined from this perspective than from the more familiar stance of the exercise of power. He maintains leaders must define collective problems, prescribe actions or policies, and finally seek support for their diagnoses and policy prescriptions. Tucker contends that political science must take account not only of leadership by those in state authority, but also of sociopolitical movements for change as vehicles of attempted leadership of political communities. Dividing such movements into those for reform and those for revolution, he illustrates this distinction with examples, including Martin Luther King Jr. as a reform leader and Lenin as a revolutionary one. Finally, Tucker raises a central question of his study: how can leadership save humankind from itself in the troubled world of today? In an insightful and moving discussion of what he calls the "crisis syndrome," Tucker analyzes problems such as population growth, resource depletion, and environmental degradation with respect to leadership. He argues that the current political process has focused on the immediate present while ignoring crises with far-reaching implications that require tough solutions. In the epilogue to this revised edition, Tucker draws on his expertise as a Russian specialist, extending the book's discussion of leadership by viewing Mikhail Gorbachev as a reform leader in Soviet Russia and Boris Yeltsin as a post-Soviet Russian leader. Tucker also readdresses the "crisis syndrome" by examining leaders' responses in the 1980s and early 1990s. Tucker's incisive reasoning, original insights, and commentary on the theory and practice of politics should make this revised edition of Politics as Leadership equally valuable and fascinating for experts in the field of political science and for concerned citizens.
Visa hela texten

Robert C. Tucker is Professor of Politics Emeritus and IBM Professor of International Studies Emeritus at Princeton University. He has served with the U.S. State Department in the Soviet Union. Among his many published works are Political Culture and Leadership in Soviet Russia, Stalin in Power: The Revolution from Above, 1928-1941, and Philosophy and Myth in Karl Marx.