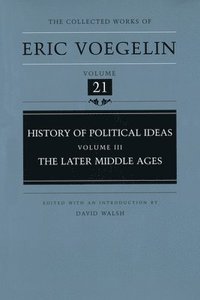 av Eric Voegelin, David Walsh
Inbunden Engelska, 1998-05-01
579
Köp
Spara som favorit
Skickas inom 10-15 vardagar.
Fri frakt inom Sverige för privatpersoner.
In this text, the third volume of ""History of Political Ideas"", the author continues his exploration of one of the most crucial periods in the history of political thought. Illuminating the great figures of the high Middle Ages, Voegelin traces the historical momentum of our modern world in the core evocative symbols which constituted medieval civilization. These symbols revolved around the enduring aspiration for the ""sacrum imperium"", the one order capable of embracing the transcendent and immanent, the ecclesiastical and political, the divine and human. The story of the later Middle Ages is that of the ""civilizational schism"" - the movement in which not only the reality of but the aspiration for the sacrum imperium gradually disappeared. His recognition of this civilizational schism provides Voegelin with his perspective on medieval society. William of Ockham, Dante, Giles of Rome and Marsilius of Padua all emerge in his study as predecessors to modern thought; each turns to personal authority and intellectual analysis in an attempt to comprehend the loss of the sacrum imperium. Yet the story of the later Middle Ages is not shown to merely revolve around disintegration. Voegelin recognizes the emergence of the constitutional political tradition as the most positive development of this period. His study of the English political pattern is juxtaposed with his perspective on the German imperial zone.
Visa hela texten

About the Author Eric Voegelin (1901-1985) was one of the most original and influential philosophers of our time. Born in Cologne, Germany, he studied at the University of Vienna, where he became a professor of political science in the Faculty of Law. In 1938, he and his wife, fleeing Hitler, emigrated to the United States. They became American citizens in 1944. Voegelin spent much of his career at Louisiana State University, the University of Munich, and the Hoover Institution at Stanford University. During his lifetime he published many books and more than one hundred articles. The Collected Works of Eric Voegelin will make available in a uniform edition all of Voegelin's major writings. About the Editor David Walsh is Professor of Politics at the Catholic University of America in Washington, D.C. He is the author of The Growth of the Liberal Soul and After Ideology: Recovering the Spiritual Foundations of Freedom.