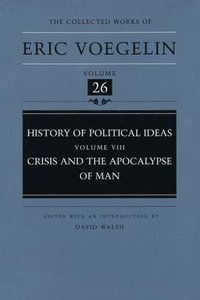 Crisis and the Apocalypse of Man

av Eric Voegelin, David Walsh
Inbunden Engelska, 1999-07-01
729
Köp
Spara som favorit
Skickas inom 10-15 vardagar.
Fri frakt inom Sverige för privatpersoner.
Reaching into our own time, Crisis and the Apocalypse of Man confronts the disintegration of traditional sources of meaning and the correlative attempt to generate new sources of order from within the self. Voegelin allows us to contemplate the crisis in its starkest terms as the apocalypse of man that now seeks to replace the apocalypse of God. The totalitarian upheaval that convulsed Voegelin's world, and whose aftermath still defines ours, is only the external manifestation of an inner spiritual turmoil. Its roots have been probed throughout the eight volumes of History of Political Ideas, but its emergence is marked by the age of Enlightenment. In our postmodern era, discussions of the collapse of the "enlightenment project" have become commonplace. Voegelin compels us to follow the great-souled individuals who sought to go from disintegration of the present toward evocations of order for the future. Such thinkers as Comte, Bakunin, and Marx suffered through the crisis and fully understood the need for a new outpouring of the spirit. They resolved to supply the deficiency themselves. As a consequence they launched us irrevocably on the path of the apocalypse of man. One of the great merits of Voegelin's analysis is his exposition of the pervasive character of this crisis. It is not confined to the megalomaniacal dreamers of a revolutionary apocalypse; rather, echoes of it are found in the more moderate Enlightenment preoccupation with progress to be attained through application of the scientific method. Faith in the capacity of instrumental reason to answer the ultimate questions of human existence defined men such as Voltaire, Helvetius, Diderot, D'Alembert, and Condorcet. It remains the authoritative faith of our world today, Voegelin argues, demonstrated by our continuing inability to step outside the parameters of the Enlightenment. Are we condemned, then, to oscillate between the rational incoherence of a science that never delivers on its promises and a now discredited revolutionary idealism that wreaks havoc in practice? This is the question toward which Voegelin's final volume points. While not direct, his response is evident everywhere. Crisis and the Apocalypse of Man could have been written only by a man who had reached his own resolution of the crisis.
Visa hela texten

About the AuthorEric Voegelin (1901-1985) was one of the most original and influential philosophers of our time. Born in Cologne, Germany, he studied at the University of Vienna, where he became a professor of political science in the Faculty of Law. In 1938, he and his wife, fleeing Hitler, emigrated to the United States. They became American citizens in 1944. Voegelin spent much of his career at Louisiana State University, the University of Munich, and the Hoover Institution at Stanford University. During his lifetime he published many books and more than one hundred articles. The Collected Works of Eric Voegelin will make available in a uniform edition all of Voegelin's major writings. About the EditorDavid Walsh is Professor of Politics at the Catholic University of America in Washington, D.C. He is the author of The Growth of the Liberal Soul and editor of Eric Voegelin's History of Political Ideas, Volume III, The Later Middle Ages.