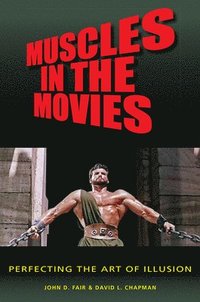 Muscles in the Movies

Perfecting the Art of Illusion

av John D Fair, David L Chapman
Inbunden Engelska, 2020-12-30
646
Köp
Spara som favorit
Skickas inom 10-15 vardagar.
Gratis frakt inom Sverige över 159 kr för privatpersoner.
Finns även som
Visa alla 1 format & utgåvor
John Fair and David Chapman tell the story of how film-makers use and manipulate the appearance and performances of muscular men and women to enhance the appeal of their productions. The authors show how this practice, deeply rooted in western epistemological traditions, evolved from the art of photography through magic lantern and stage shows into the motion picture industry, arguing that the sight of muscles in action induced a higher degree of viewer entertainment. From Eugen Sandow to Dwayne 'The Rock' Johnson, muscular actors appear capable of performing the miraculous, and with the aid of stuntmen and filming contrivances, they do. By such means, muscles are used to perfect the art of illusion, inherent in movie-making from its earliest days.
Visa hela texten

Will immediately become the definitive treatment of its topic, a subject that no other work has had the ambition to tackle in such detail and range." -John Ibson, California State University, author of Picturing Men: A Century of Male Relationships in Everyday American Photography "Moving from the silent era to the post-Schwarzenegger age, David Chapman and John Fair's book entertains and informs in equal measure. Few works will be able to touch the breadth and nuance of this work. Nor will they match the authors' keen eye for detail and flair. In seeking to integrate, and highlight, the importance of muscles in film, Chapman and Fair sweep across national and transnational histories to explore the ongoing human fascination with athleticism. Be they Italians, Germans, Americans or everyone in between, movie goers have long looked to the chiselled body for motivation, information and solace. In exploring this interest, Chapman and Fair have produced a book that will likely serve as the reference work for years to come." -Conor Heffernan, University of Texas at Austin, Trustee of the British Society of Sport History "From Sandow to Schwarzenegger and beyond, Chapman and Fair's survey is the definitive study of the built physique in film. Ably balancing the fan's perspective with meticulous research, Muscle in the Movies is an essential contribution to our understanding of bodies in cinema." -Tolga Ozyurtcu, University of Texas at Austin, Historian of Lifestyle Sport "In Muscles in the Movies, John Fair and David Chapman demonstrate in fascinating detail how modernity has produced its own illusory image of the muscular body through photography and movie making. They illuminate for the reader how cinema was born muscled, flexing and fully fleshed such that Hollywood could cash in on images of assertive ideal masculinity by encouraging audiences to gaze in awe upon the human machine. The medium of muscle thus became an inherent part of action movies in the service of spectacle and celebratory culture. As the authors show so convincingly, it was the clever marriage of bodily form and function and the psychic tension it created that perfected this art of illusion for moviegoers and made muscle movies both popular and lucrative." -Patricia Vertinsky, School of Kinesiology, University of British Columbia, coauthor of The Female Tradition in Physical Education: Women First reconsidered

John D. Fair is Professor Emeritus of History at Auburn University and Adjunct Professor of Kinesiology at University of Texas at Austin. He is the author of seven books including Mr. America: The Tragic History of a Bodybuilding Icon. David L. Chapman is an independent scholar and author of more than a dozen books including Sandow the Magnificent: Eugen Sandow and the Beginnings of Bodybuilding.