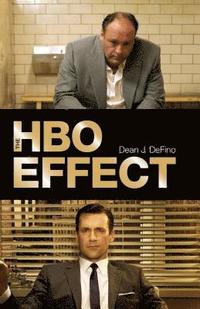 av Dean J Defino
Häftad Engelska, 2013-11-21
279
Köp
Spara som favorit
Skickas inom 10-15 vardagar.
Fri frakt inom Sverige för privatpersoner.
Finns även som
Visa alla 2 format & utgåvor
No advertisers to please, no censors to placate, no commercial interruptions every eleven minutes, demanding cliffhangers to draw viewers back after the commercial breaks: HBO has re-written the rules of television; and the result has been nothing short of a cultural ground shift. The HBO Effect details how the fingerprints of HBO are all over contemporary film and television. Their capability to focus on smaller markets made shows like Sex and the City, The Sopranos, The Wire, and even the more recent Game of Thrones and Girls, trigger shows on basic cable networks to follow suit. HBO pioneered the use of HDTV and the widescreen format, production and distribution deals leading to market presence, and the promotion of greater diversity on TV (discussing issues of class and race). The HBO Effect examines this rich and unique history for clues to its remarkable impact upon television and popular culture. It's time to take a wide-angle look at HBO as a producer of American culture.
Visa hela texten

This book turns the HBO story inside out and productively repositions what we think we know about the premium pay-TV company within a broader historical and institutional history of US culture and television. -- Janet McCabe,Lecturer in Film, Television and Creative Industries, Birkbeck, University of London, UK The HBO Effect is not the first book on HBO, but 'it's not TV' criticism in any ordinary sense. It's water cooler study criticism that will have scholars of the medium and serious viewers buzzing about this well written, engaging, funny, and constantly surprising investigation. Dean J. DeFino succeeds brilliantly in establishing his central contention: that HBO 'is itself a by-product of [the] long history [of television], not some aberration.' -- David Lavery, Professor of English, Middle Tennessee State University, USA, and editor of The Essential Sopranos Reader Summarized. * LitRant * In The HBO Effect, DeFino (Iona College) demonstrates that HBO is fully embedded within a long history of "quality television" storytelling and uses its positions to take risks and walk the line between complexity and popularity. The book notes HBO so-called showrunners created "quality television" for networks long before working with HBO. Although the book can be applauded for its attention to early stand-up comedy and "sex-docs" like Cathouse, which others often ignore, DeFino's focus on character studies and comparative analysis (for example, a lengthy comparison of The West Wing and The Sopranos) does not provide much in terms of cable history that cannot be found elsewhere thoughtful television criticism, but the book could have been strengthened by engaging more thoroughly with scholarship that tackles issues of narrative complexity and industry studies. Less-experiences readers will likely enjoy the book, but specialists will leave wanting more."-Summing Up: Recommended. Lower-division undergraduates; general readers.-- -- S. Pepper * CHOICE *

Dean J. DeFino is Associate Professor of English and Director of Film Studies at Iona College in New Rochelle, New York, USA. His previous publications include Faster, Pussycat! Kill! Kill! (forthcoming), and numerous essays on a range of subjects, from The Sopranos to The Maltese Falcon to Trailer Park Boys.