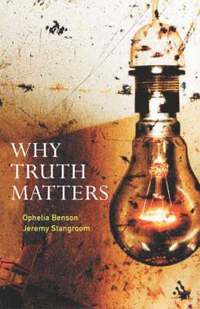 av Jeremy Stangroom, Ophelia Benson
Inbunden Engelska, 2006-02-01
369
Köp
Spara som favorit
Kan tyvärr inte längre levereras innan julafton.
Finns även som
Visa alla 2 format & utgåvor
Truth has always been a central preoccupation of philosophy in all its forms and traditions. However, in the late twentieth century truth became suddenly rather unfashionable. The precedence given to assorted political and ideological agendas, along with the rise of relativism, postmodernism and pseudoscience in academia, led to a decline both of truth as a serious subject, and an intellectual tradition that began with the Enlightenment. Why Truth Matters is a timely, incisive and entertaining look at how and why modern thought and culture lost sight of the importance of truth. It is also an eloquent and inspiring argument for restoring truth to its rightful place. Jeremy Stangroom and Ophelia Benson, editors of the successful butterfliesandwheels website - itself established to 'fight fashionable nonsense' - identify and debunk such nonsense, and the spurious claims made for it, in all its forms. Their account ranges over religious fundamentalism, Holocaust denial, the challenges of postmodernism and deconstruction, the wilful misinterpretation of evolutionary biology, identity politics and wishful thinking. Why Truth Matters is both a rallying cry for the Enlightement vision and an essential read for anyone who's ever been bored, frustrated, bewildered or plain enraged by the worst excesses of the fashionable intelligentsia.
Visa hela texten

'Though its arguments are simple, straightforward and unpretentious, the book is still remarkably effective in retaining the interest of specialists. Although perhaps is even more successful for its care in not showing, at the same time, condescension towards lay readers. In so doing, it teaches by example.' ~ J. Elias Saidennunez, Lund University, Consciousness, Literature and the Arts, Vol 7 No. 3, Dec 2006 -- J. Elias Saidennunez In this accessible text, the editors of the Butterfliesandwheels.com website critically examine the current trend of skepticism regarding the reality, meaning, possibility and importance of the truth. Calling for a return to the intellectual tradition of the Enlightenment, they expose the faulty thinking of everyone from religious fundamentalists and Holocaust deniers to relativist intellectuals and postmodernist academics. Reference & Research Book News, February 2007. Reviewed on Classic FM's Classic Newsnight - 26 Sept 2007 'A clear, accessible and hugely important account of what it is to be rational. Popular philosophy at its best.' "Benson and Stangroom, authors of The Dictionary of Fashionable Nonsense (2004), hearken back to a decidedly unfashionable Enlightenment ideal of objective and scientifically verifiable truth battling the obscurantist forces of relativism, skepticism, faith, and identity politics. The authors are not academics, and their book is written for a lay audience, so although they do evaluate the arguments of some scholars (especially in a couple of chapters on the sociology of science), they as frequently turn to newspapers for contemporary examples of the disregard for truth (e.g., a tobacco company suppressing medical research damaging to its interests, a pro-Palestinian professor shouting down Jewish students). This element of social critique is the most interesting part of the book..." - C. S. Seymour, Wayland Baptist Univeristy- Choice, October 2006 * Choice * Postmodernism is often billed as attacking truth and science. This is how it is presented in the valuable little book Why Truth Matters, by the editors of the sceptical website butterfliesandwheels.com, Ophelia Benson and Jeremy Stangroom. They mount a spirited counterattack, reminding us - in the way that Cambridge philosopher GE Moore was famous for doing - that if it comes to a battle for hearts and minds, basic convictions of common sense and science beat philosophical subtleties hands down. Where Brian King horrifies us with his liars, Benson and Stangroom reveal a parallel rogues' gallery of social constructivists, who look at how individuals and groups participate in the creation of their own perceived reality. These "rogues" include the feminist Sandra Harding and the neo-pragmatist Richard Rorty, but the doyen must surely be the French philosopher of science Bruno Latour. Latour's confusion of words and things led him to the precipice of denying that there could have been dinosaurs before the term was invented. Presumably a similar argument would show that nobody before Crick and Watson had DNA. Why Truth Matters is an excellent example of philosophy done well but also, and not coincidentally, made accessible and exciting. Truth matters, it tells us "not in a dull perfunctory dutiful sense, but in a real lived felt sense - 'on the pulses' as Keats put it". * Financial Times * "...valuable little book..." - Simon Blackburn, Financial Times -- Simon Blackburn * Financial Times * "Why truth matters is an excellent example of philosophy done well but also, and not coincidentally, made accessible and exciting." ~ Simon Blackburn, Financial Times -- Simon Blackburn * Financial Times * 'A sassy and profound response to [a] cascade of superstition and silliness ... Benson and Stangroom answer the clotted, barely readable sentences of the postmodernists with sentences so clear you could swim in them. There should be a law demanding every purchase o

Jermey Stangroom is co-editor (with Julian Baggini) of The Philosophers' Magazine and the successful philosophy books, What Philosophy Is and Great Thinkers A-Z. He and Ophelia Benson are editors of www.butterfliesandwheels.com