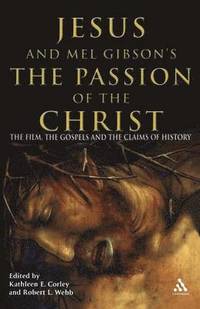 Jesus and Mel Gibson's the 'Passion of the Christ'

The Film, the Gospels, and the Claims of History

av Robert Webb, Kathleen E Corley
Häftad Engelska, 2004-08-01
429
Köp
Spara som favorit
Skickas inom 10-15 vardagar.
Fri frakt inom Sverige för privatpersoner.
Films about religion have a habit of stirring up controversy - witness Scorsese's The Last Temptation of Christ and The Life of Brian! Mel Gibson's film is therefore following in a long tradition. This book, written by a star-studded team of international biblical experts, looks not only at The Passion of the Christ itself, but also the religious and cultural contexts behind it, such as the classical art that influenced it, or the way biblical characters are portrayed. Aimed at students of both religion and film studies, the clergy and interested lay people, this book will help the reader to understand both the film and the gospels in a new light.
Visa hela texten

'...All of the essays in the book are well written and balanced...a thoroughly useful tool in evalluating the film...highly...recommended!--Helenann Hartley "Expository Times " " solid collection of 14 scholarly and well-argued articles. Highly Recommended."-Library Journal 'Lively and engaging, it undoubtedly makes fine reading for specialist and mere (screen-) spectator alike...Love or hate the film, there is no denying a deeper appreciation of its aims and issues will be gained with this superb collection to hand.' Louise Lawrence, University of Glasgow "This volume contains fifteen essays by biblical scholars from Canada, the U. S. and the U. K. who have viewed the movie attentively and who comment from various perspectives on the experience of watching the film, on its relationship to the gospels and to history and on the artistic influences that shaped it. Since religious leaders have touted 'The Passion' as exceptionally faithful to the gospels and to history, it is important to test those claims against the film's actual content. This informed and multifaceted volume would be suitable for use in a course on Jesus films or in church-based 'faith and film: discussions." -"Toronto"" Journal of Theology" " " Mention of Robert L. Webb's essay: ."..provides a useful analysis of the much criticized, anti-Semitic influence of Anne Catherine Emmerich on Gibson's screenplay..." (Christianity and Literature, Spring 2007)--Sanford Lakoff

Bloggat om Jesus and Mel Gibson's the 'Passion of th...

Dr. Kathleen E. Corley is Oshkosh Northwestern Distinguished Professor and Professor of New Testament at the University of Wisconsin-Oshkosh. Dr. Robert L. Webb is an independent scholar who writes and teaches on a variety of New Testament subjects.