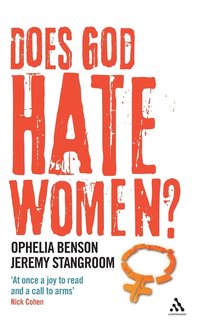 av Ophelia Benson, Jeremy Stangroom
Inbunden Engelska, 2009-05-21
309
Köp
Spara som favorit
Kan tyvärr inte längre levereras innan julafton.
Finns även som
Visa alla 1 format & utgåvor
The new book from high profile philosophy writers Ophelia Benson and Jeremy Stangroom (authors of the hugely successful "Why Truth Matters"), exploring a topical and controversial religious and cultural issue in a highly accessible manner.This fascinating book explores the role that religion and culture play in the oppression of women. Philosophy writers Ophelia Benson and Jeremy Stangroom ask probing questions about the way that religion shields the oppression of women from criticism and why many Western liberals, leftists and feminists have remained largely silent on the subject.The lives of women in the industrialized world have improved enormously in the last hundred years, especially so, in social, cultural and political terms, in the last forty. But throughout the rest of the world, a great many women lead lives of misery and sometimes plain horror. They are often considered and treated as the property of men and have few, if any, rights. Such treatment is generally sustained and protected by a combination of religion and culture."Does God Hate Women?" explores instances of the oppression of women in the name of religious and cultural norms and how these issues play out both in the community and in the political arena. Drawing on philosophical concerns such as truth, relativism, knowledge and ethics, Benson and Stangroom assess the current situation and provide a rallying call for a progressive politics that is committed to universal values. This important new book will appeal to anyone interested in issues of global justice, human rights and multiculturalism.
Visa hela texten

Author article (topic of book), book mention, The Observer. 31 May 2009. Discussion of book, contents and potential impact (no review) concerning book's thoughts on Muslim female abuse and Mohammad's 'Child Bride', timesonline.co.uk. 31 May 2009. Article on book in Muslim Weekly, 5 June 2009. Article on book by Madeleine Bunting, Guardian, 16 June 2009. Title and The Times article discussed in Private Eye, June 2009. 'Fans of Richard Dawkins will love it' - Sholto Byrnes, Independent on Sunday 'We may want to react to the title of this book with a defensive "No, of course not." It will be more useful to acknowledge the challenge posed by the authors' refusal to avoid awk ward questions. We should consider the extent to which the way, we think, we are presenting our faith matches what those out side the Church actually perceive.' - Church Times "As I read Does God Hate Women, I was impressed by the many probing questions that the writers focused on in the three great monotheistic religions."Network, February 2010 'Ophelia Benson and Jeremy Stangroom are the editors of Butterflies and Wheels, the best atheist site on the web. In Does God Hate Women? they forensically dismantle the last respectable misogyny ... By the end of this book-length blast, Benson and Stangroom have left religious hatred of women in rubble. Anybody not addled by superstition will have to conclude that such bigotry deserves neither respect nor deference.' - Johann Hari, New Statesman Reviewed in The Observer, July 2009. Author Q & A and title mention in New Statesman. 'At a time when too many people bend over backwards to avoid offending the sensibilities of those with a belief in the supernatural, Benson and Stangroom provide a breath of fresh air. They subject the core beliefs of the world's leading faiths to the rigorous analysis they sometimes escape out of a misplaced fear of giving offence ... All this desperately needs to be said ... As this book reminds us, religion brings with it patriarchal ideas about gender difference which claim to honour women but almost always give men power over them.' - Joan Smith, The Independent Reviewd in Morning Star, August 2009. http://www.morningstaronline.co.uk/index.php/culture/books/non_fiction/does_god_hate_women 'The predecessors of today's critics would have hailed [this book] as a feminist classic.' - Standpoint

Ophelia Benson is editor of www.butterfliesandwheels.com, deputy editor of The Philosophers' Magazine and co-author, with Jeremy Stangroom, of Why Truth Matters. She is also a frequest contributor to Free Inquiry. Jeremy Stangroom is co-editor, with Julian Baggini, of The Philosophers' Magazine and co-author of Do You Think What You Think You Think? (Granta, 2006), What Philosophers Think and Great Thinkers A-Z. He and Ophelia Benson are co-authors of Why Truth Matters and The Dictionary of Fashionable Nonsense.