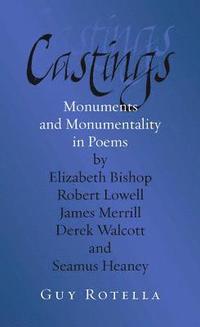 av Guy Rotella
Inbunden Engelska, 2004-05-01
1189
Köp
Spara som favorit
Skickas inom 5-8 vardagar.
Gratis frakt inom Sverige över 159 kr för privatpersoner.
Finns även som
Visa alla 1 format & utgåvor
Whether looming over public squares or dotting old battlefields, monuments certify a culture's present by securing its past and pledging its future. They embody exemplary persons or events and the shared ideals they stood for, prompting an obligation to keep those ideals standing now and forever. But monuments also exaggerate the staying power of civilizations and of art. In the second half of the twentieth century, postmodern critics often decried monuments not only for their pretensions and stiffness but also for their supposed role in perpetuating oppressive cultural conventions. Even so, many artists and thinkers of the same period tried to reimagine monuments in ways that were humbler and more provisional but still culturally confirming. In Castings, Guy Rotella examines the work of five important poets who have engaged in that effort: Elizabeth Bishop, Robert Lowell, James Merrill, Derek Walcott, and Seamus Heaney.
Visa hela texten

Rotella's fluid mastery of literary history and theory allows him to dispense with jargon, and his skillful mix of biography, history, and close reading provides an entirely convincing analysis of each poet's attitude toward the idea of the monumental in the practice of his or her art. --Brett Millier . . . the book presents a broad, sophisticated, and engaging account of postmodern aesthetics and politics; it also includes comprehensive and sensitive close readings of specific poems, readings that point outward to the larger cultural issues with which the book is concerned. Highly recommended. --Choice Brilliantly argued, and written with an elegance that comes close to the poetic in its sensitive, subtly playful responsiveness to the language of the texts he treats, Guy Rotella's new book deserves a wide audience. His subject is poems about monuments--and the poem as monument--in the work of Elizabeth Bishop, Robert Lowell, James Merrill, Derek Walcott, and Seamus Heaney. But he's also interested in the complex concept and fate of the monument (and of monumentalism in general) in the postmodern era, and what he gives us is a view of postmodern history--a view of it, that is, from inside the poems he discusses--and of the ways in which they respond to and are themselves affected by that history, as well as by our culture's skewed and tangled efforts to memorialize. --Robert Kern

Guy Rotella is professor of English at Northeastern University. He is the author of Reading and Writing Nature: The Poetry of Robert Frost, Wallace Stevens, Marianne Moore, and Elizabeth Bishop and editor of the anthology Critical Essays on James Merrill.