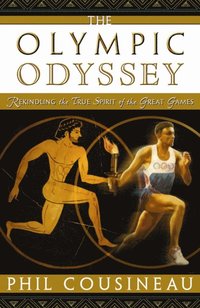 Rekindling the True Spirit of the Great Games

av Phil Cousineau
E-bok (EPUB - DRM), Engelska, 2013-11-01
179
Ladda ned
Spara som favorit
Laddas ned direkt
Läs i vår app för iPhone, iPad och Android
Nothing draws people together quite like sports. This book explores exactly why that is. In anticipation of the nostalgic return of the Games to Greece in 2004, mythologist and life-long athlete Phil Cousineau has produced a work that, unlike other titles on the subject, delves deeply into the spiritual dimension of the Olympics and potentially all athletic activity.Reaching far back to the mythic and historic origins of the Games nearly 3,000 years ago, Cousineau examines the driving motivation behind these first ancient gatherings, which was peaceful competition in an atmosphere of fair play and brotherhood, as well as the pursuit of excellence in mind, body, and spirit. And following through to the present day, he describes how these same ideals still compel coaches, athletes, and fans to sports arenas today, despite obstacles with doping and bribery we occasionally find in the modern Games.A collectors dream, this book contains ancient and contemporary illustrations, historic facts, anecdotes, famous quotes, and interviews with Olympic athletes, including three-time medalist Sarunas Marciulionis of Lithuania and legendary swimmer Matt Biondi. Also featured are excerpts from Cousineaus interviews about the cultural role of sports with mythologist Joseph Campbell and religious historian Huston Smith.THE OLYMPIC ODYSSEY is written for all fans of the game of life who esteem true leadership, aspire to personal wholeness, and seriously question the cultural obsession with winning at all costs. Ultimately, it suggests the deepest reason we so love great athletes is for how they encourage us to achieve the highest level of being possible in our own lives, no matter what the arena in which we play.
Visa hela texten