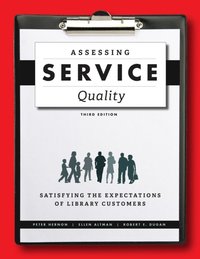 Satisfying the Expectations of Library Customers

av Peter Hernon, Ellen Altman, Robert E Dugan
Häftad Engelska, 2015-05-30
759
Köp
Spara som favorit
Finns även som
Visa alla 3 format & utgåvor
Academic and public libraries are continuing to transform as the information landscape changes, expanding their missions into new service roles that call for improved organizational performance and accountability. Since Assessing Service Quality premiered in 1998, receiving the prestigious Highsmith Library Literature Award, scores of library managers and administrators have trusted its guidance for applying a customer-centered approach to service quality and performance evaluation. This extensively revised and updated edition explores even further the ways technology influences both the experiences of library customers and the ways libraries themselves can assess those experiences. With a clear focus on real-world application, the authors: Challenge conventional thinking about the utility of input, output, and performance metrics by suggesting new ways to think about the evaluation and assessment of library services; Explain service quality and customer satisfaction, and demonstrate how they are separate but intertwined; Identify procedures for qualitatively and quantitatively measuring both service quality and satisfaction; Encourage libraries to take action by presenting concrete steps they can take to become more customer-centric; Offer a range of customer-related metrics that provide insights useful for library planning and decision making, such as surveys and focus groups. This book shows how to nurture an environment of continuous improvement through effective service quality assessment.
Visa hela texten

Peter Hernon is a professor emeritus at Simmons College, Boston, and was the principal (and founding) faculty member for the doctoral program, Managerial Leadership in the Information Professions. He received his PhD degree from Indiana University, Bloomington, and was the 2008 recipient of the Association of College and Research Libraries' award for Academic/Research Librarian of the Year, the founding editor of Government Information Quarterly, and past editor-in- chief of The Journal of Academic Librarianship. He is the coeditor of Library & Information Science Research and has taught, conducted workshops, and delivered addresses in eleven countries outside the United States. He is the author or co-author of 57 books, including the award-winning Federal Information Policies in the 1980s (1985) and Viewing Library Metrics from Different Perspectives (2009). Ellen Altman, now retired, was visiting professor in the Department of Library and Information Studies, Victoria University of Wellington (New Zealand), 1996- 1997. She had been a faculty member at the Universities of Kentucky and Toronto and at Indiana University, professor and director of the Graduate Library School at the University of Arizona, and feature editor of Public Libraries, the official publication of the Public Library Association. Altman was coeditor of "The JAL Guide to the Professional Literature" in the Journal of Academic Librarianship, a member of the editorial board of Library Quarterly, and a co-author of Performance Measures for Public Libraries. She received the Distinguished Alumni Award from Rutgers School of Communication, Information and Library Studies, in 1983. Robert E. Dugan is the dean of libraries at the University of West Florida (Pensacola). Prior to assuming this position, he had been at Suffolk University, Boston; Wesley College, Dover, Delaware; and Georgetown University, Washington, D.C. He has also worked in state and public libraries during his 40-year career. He is the co-author of 13 books, including the award-winning Viewing Library Metrics from Different Perspectives (2009).