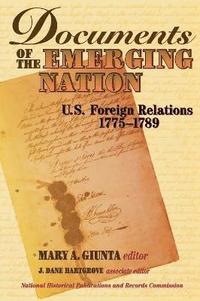 Documents of the Emerging Nation

Documents of the Emerging Nation: U.S. Foreign Relations, 1775-1789 brings a veritable library of diplomatic records into the classroom. This treasure trove holds gems that illustrate the great challenges faced by American diplomats in gaining foreign recognition, entering into treaties, achieving independence, and fulfilling the new nation's promise in an inhospitable world. -- John P. Kaminski, University of Wisconsin-Madison Congratulations to the editors and the National Historical Publications and Records Commission for a job well done. They have compiled a sourcebook that is sure to be the standard documentary text for college-level courses on early American foreign relations. As suggested by the title, the collection highlights the fundamental relationship between American nationalism and American foreign relations. -- William E. Weeks, San Diego State University An enormously useful compilation of documents critical for the understanding of American foreign relations during the Revolutionary and Confederation periods. Documents of the Emerging Nation will enrich all courses in early American history and is essential for all serious students of the period. -- Kinley Brauer, University of Minnesota