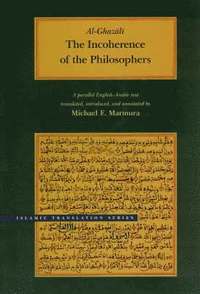 The Incoherence of the Philosophers

av Abu Hamid Muhammed Al-Ghazali
Inbunden Engelska, 2000-01-01
457
Köp
Spara som favorit
Skickas inom 2-5 vardagar.
Fri frakt inom Sverige för privatpersoner.
Although Abu Hamid Muhammad al-Ghazali lived a relatively short life (1058-1111), he established himself as one of the most important thinkers in the history of Islam. The Incoherence of the Philosophers, written after more than a decade of travel and ascetic contemplation, contends that while such Muslim philosophers as Avicenna boasted of unassailable arguments on matters of theology and metaphysics, they could not deliver on their claims; moreover, many of their assertions represented disguised heresy and unbelief. Despite its attempted refutation by the twelfth-century philosopher Ibn Rushd, al-Ghazali's work remains widely read and influential.
Visa hela texten

Bloggat om The Incoherence of the Philosophers