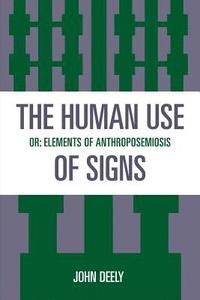 The Human Use of Signs

In the span of a decade, Professor Deely has produced three major works which have singly and together systematically amplified and deepened our knowledge of the intriguing world of signs, particularly in humanity's service. In this third, summative book of the trio-so lucidly argued as to insure accessibility for one and all-he once again puts his immense erudition to excellent practical use. -- Thomas A. Sebeok, Research Center for Language and Semiotic Studies An impressive synthesis of semiotics and anthropology which puts human experience in a new light. Deely gives us the foundation for a new paradigm for anthropology. -- Nathan Houser, Peirce Edition Project John Deely's magisterial treatise accomplishes nothing less than the construction of the foundations for semiotic philosophical anthropology in the tradition of Poinsot and Peirce. -- Richard J. Parmentier, Brandeis University John Deely has produced a treatise, at once formidable and formal, that seeks to incorporate the anthropological endeavor into the theoretical canon of semiotics as he has developed and advocated it through a compendious series of historically grounded studies. Perhaps of most interest to anthropologists will be his insistence that the semiotic recognition of an 'objective' world does not necessarily commit the analyst to naive strategies of interpretation. This book offers a distinctive philosophical defense of the logic of anthropological practice. -- Michael Herzfeld, Harvard University; author of Cultural Intimacy: Social Poetics in the Nation-State

John Deely, professor of philosophy at Loras College, is the author of Tractatus de Signis: The Semiotic of John Poinsot (1985), Introducing Semiotics (1982) and Basics of Semiotics (1990).