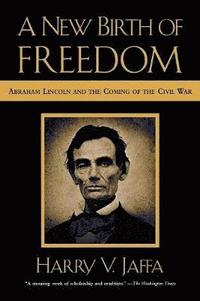 A New Birth of Freedom

Abraham Lincoln and the Coming of the Civil War

av Harry V Jaffa
Häftad Engelska, 2004-02-01
409
Bevaka
Spara som favorit
Tillfälligt slut – klicka "Bevaka" för att få ett mejl så fort boken går att köpa igen.
Finns även som
Visa alla 3 format & utgåvor
A New Birth of Freedom is the culmination of over a half a century of study and reflection by one of America's foremost scholars of American politics, Harry V. Jaffa. This long-awaited sequel to Crisis of the House Divided, first published in 1959, continues Jaffa's piercing examination of the political thought of Abraham Lincoln and the themes of self-government, equality, and statesmanship. Whereas Crisis of the House Divided focused on the famous senate campaign debates between Lincoln and Stephen Douglas, this volume expands and deepens Jaffa's analysis of American political thought, and gives special attention to Lincoln's refutation of the arguments of John C. Calhoun-the intellectual champion of the Confederacy. According to Jaffa, the Civil War is the characteristic event in American history-not because it represents a statistical frequency, but rather because through the conflict of that war we are able to understand what is fundamentally at stake in the American experiment in self-government.
Visa hela texten

Jaffa has again delivered a powerful contribution to Lincoln scholarship. Historians will find many riches in Jaffa's latest learned volume. -- Michael Vorenberg * American Historical Review * Harry V. Jaffa takes his time. The wait is well worth it. In unpacking Lincoln's great speeches and debate orations, Jaffa shows what an astute, formidable, and brilliant interlocutor Lincoln was. -- Jean Bethke Elshtain, The Laura Spelman Rockeller Professor of Social and Political Ethics, University of Chicago; author of Just War Against Terror * Civil War Book Review * On exhibit in this book is a powerful intellect. . . . Among the prominent Americans who are brilliantly illuminated here as they have rarely been are Thomas Jefferson, John C. Calhoun, Jefferson Davis, and, of course, Abraham Lincoln. -- George Anastaplo, author of Abraham Lincoln: A Constitutional Biography A New Birth of Freedom more than meets the critical expectations that Professor Jaffa has invited in the years since his acclaimed study, Crisis of the House Divided: An Interpretation of the Lincoln-Douglas Debates, reoriented scholarly investigation of Abraham Lincoln and the coming the Civil War. A work of profound historical erudition and disciplined philosophical criticism, Jaffa's new work offers an original analysis of the crisis of the Union in the perspective of the western political tradition and in the context of the constitutional principles of the American Revolution. More judiciously than any other twentieth-century scholar writing in the nationalist tradition, Jaffa meets the challenge posed by the political philosophy and constitutional constructions of John C. Calhoun and the southern secessionists. Recognizing the openness of the historical situation that existed in 1861, Jaffa provides the most searching and fair-minded analysis of Lincoln's reasons for resisting secession that I have ever read. -- Herman Belz, University of Maryland, College Park Four decades ago, Harry Jaffa offered powerful insights on the Lincoln-Douglas debates in his Crisis of the House Divided. In this long-awaited sequel, he picks up the threads of that earlier study in this stimulating new interpretation of the showdown conflict between slavery and freedom in the election of 1860 and the secession crisis that followed. Every student of Lincoln needs to read and ponder this book. -- James M. McPherson, Princeton University With A New Birth of Freedom Harry V. Jaffa reestablishes himself as the greatest living scholar of Lincoln's political thought and Lincoln's greatest defender, period. Jaffa's analysis of the First Inaugural is without parallel as he demonstrates once and for all the incoherence of Calhoun's arguments for the southern secession. For every citizen interested in the preservation of the American union and the principles on which it rests, Jaffa's book is a must-read. -- Steven B. Smith, Yale University Harry V. Jaffa's A New Birth of Freedom is a brilliant and incisive explication of the political ideas that were at the heart of the coming of the Civil War. Jaffa is at his very best in demolishing the currently fashionable argument that the ideal of equality was not part of the American constitutional system from its beginning. This is a work of deep learning and great relevance, both to Lincoln's time and our own. It is a worthy sequel to the author's classic study, A Crisis of the House Divided. -- William E. Gienapp, Harvard University Forty years ago, Harry Jaffa wrote the greatest book on Abraham Lincoln's politics for a generation; now, Jaffa has written the greatest book on Lincoln's politics for another generation. A New Birth of Freedom is a relentless, powerful analysis of how Abraham Lincoln claimed the high intellectual ground of right, of universality, and of prudence from the romantic and racist ideology of John Calhoun-and claims it still from the shadow of Calhoun's postmodern imitators. -- Allen C. Guelzo, Gettysburg College; author of Abr

Harry V. Jaffa is the Henry Salvatori Professor of Political Philosophy Emeritus at Claremont McKenna College and Claremont Graduate University, a distinguished fellow of the Claremont Institute, and the author of ten books.