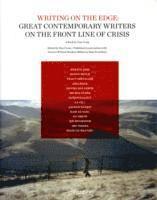 Writing on the Edge

Great Contemporary Writers on the Front Line of Crisis

"In the collection Writing On the Edge, fourteen esteemed writers chronicle their travels with MSF teams through countries in crisis. Accompanied by Tom Craig's photographs, Martin Amis, Tracy Chevalier, Daniel Day Lewis and others take readers into rarely seen reaches of Colombia, Burundi, Gaza, Uzbekistan, Cambodia, Sierra Leone, Uganda, and elsewhere." The Huffington Post "These art works, in their artistry and complexity of thought, start conversations, whereas most non-professional images and texts have the more straightforward task of delivering "subjectified" information. This is why a book like Writing on the Edge: Great Contemporary Writers on the Front Line of Crisis, which was created by photographer Tom Craig in conjunction with Medecins Sans Frontieres, is an important anthology." The Last Magazine "An important book with an unblinking view of global issues, Writing on the Edge features fourteen essays that take the reader on a harrowing tour of countries in crisis...These powerful stories, accompanied by Tom Craig's moving photographs make an impact on the reader that will not soon be forgotten." PhotographyBlog.com "So it is with the stories and photos here which take the reader into some of the world's most persistent agony zones... To compile this panorama of suffering, photographer Tom Craig took with him some of the world's most eloquent writers and asked each to put into words the specific situations his photos could only hint at... Craig's 100 color pictures are both riveting and heartbreaking.. The spotlight is always on the downtrodden. In the end, the book suggests, the only sure victory is in the trying, in not turning away." Foreword "Of course, reporting thusly is only the beginning, albeit an important one, as we cannot attempt to fix that which the world cannot or does not want to see. And from the perspective of these writers and researchers, there are few people or organizations that have much, beyond a sense of service, to gain in revealing these often intentionally obscured sights. But merely for that alone, we should be grateful for those who do." BlogOnBooks.com

Bloggat om Writing on the Edge

Renowned photographer Tom Craig has been nominated three times for British Magazine photographer of the year. Dan Crowe is the founder of blazingword.com, the literary editor of Another Magazine, and the author of How I Write: The Secret Lives of Authors (Rizzoli).