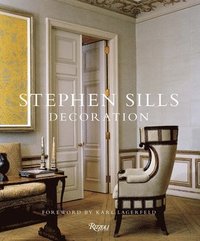 av Stephen Sills, Francois Halard
Inbunden Engelska, 2013-10-15
369
Köp
Spara som favorit
Skickas inom 10-15 vardagar.
Fri frakt inom Sverige för privatpersoner.
The first book to focus on the solo residential work of the visionary interior decorator Stephen Sills. Simultaneously classical and modern, Stephen Sills's design work is a dialogue between past and present. Filled with luxurious fabrics, furnishings from across centuries, and unusual finishes, his work is polished, seemingly effortless, and quietly rich, with a muted color palette that serves as a brilliant foil for modern art. In this striking, meditative volume, the follow-up to his best-selling book Dwellings, Sills presents sixteen breathtaking homes, gorgeously photographed by the legendary Francois Halard, in locations as varied as a penthouse on Manhattan's Fifth Avenue, a modern Aspen retreat, an estate on the North Shore of Long Island, and his own country house in Bedford, New York (dubbed the "chicest house in America" by Karl Lagerfeld). Common to them all is a sense of atmosphere, point of view, and soul--the sense of a master craftsman at work.
Visa hela texten

..".highly anticipated design title...Stephen Sills is an expert at imagining chic spaces that complement their fashionable occupants." Architectural Digest "The Sills aesthetic is simple and exacting, as evidenced here in a new book -a refined palette matched with a visually arresting collection of furniture and objects." Town & Country "Interior decorator Stephen Sills is turning heads with his classical, yet modern style that illuminates even the most lackluster spaces. This volume offers you the chance to see dozens of homes filled with Sills' awe-inspiring designs...there's something to inspire everyone." Society Diaries ..".Exceptional-destined to become another design classic. The title of the book is so simple, but Sills' work most definitely is not. Sills' projects are beautifully crafted and filled with treasures and exquisite details. The cover is an excellent introduction to the caliber and quality of the work contained within. I highly recomend Decoration by Stephen Sills- it is a beautiful, high quality book inside and out...great detail with superb photography....a book I return to again and again as reference..." -Things That Inspire ..".a lushy photographed book..." -New York Post "Successfully mixing ultra-traditional and ultra-modern takes a level of experties and skill surpassing that of most decorators. Sills, however has that raw talent in spades. Each page delights as it reveals his magical mixing act." -Traditional Home "Elegant style on every page" -The Herald "The book...shares his emphasis on comfort, his love of classical elements, his restrained use of color and his preference for sophisticated finishes." -The Times

Stephen Sills is one of the most lauded interior designers working today. Originally a partner in the formidable team Sills Huniford Associates, his clients have included Vera Wang, the Newhouse family, Tina Turner, Anna Wintour, and the Rockefeller family. His designs have been featured in Architectural Digest, Elle Decor, House & Garden, Vogue, Maison & Jardin, W, New York Magazine, and the New York Times, as well as in numerous books. He is a member of the AD100 and was included in AD's "30 Deans of American Design." He was recently included in Elle Decor's list of the top 25 designers and received the Creative Spirit Award from the Pratt Institute in 2012. Francois Halard is one of the most acclaimed photographers of interiors in the world. His work has appeared in Vogue, Vanity Fair, and House & Garden for over thirty years, and has been featured in countless books.