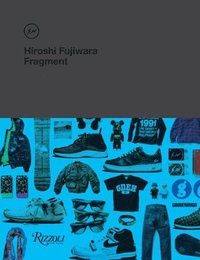 Inbunden Engelska, 2014-07-01
539
Köp
Spara som favorit
Skickas inom 3-6 vardagar.
Fri frakt inom Sverige för privatpersoner.
Known internationally and variously described as the Godfather of Streetwear and one of the founding fathers of Tokyo's Harajuku scene, Hiroshi Fujiwara exerts a disproportionate influence over contemporary design culture. Fujiwara, who had collaborated with the likes of Malcolm McLaren and Vivienne Westwood as a teenager in the early 1980s, merged a seminal interest in punk with hip-hop and skate culture to become one of Japan's principal tastemakers. A musician and producer, Fujiwara is also one of the most prolific of sneaker designers, and his kicks are some of the most sought-after collectibles. In addition to his very visible and longstanding collaborations with Nike, he has authored a number of fashion lines, and is at the head of the Tokyo-based Fragment Design. Maintaining his reign as the arbiter of hip for over 30 years, this book presents the breadth of his career, including sections on his highly sought after artwork and graphics, sneakers, product design, and curated personal effects. With an introduction by Eric Clapton and contributions by Takashi Murakami, Mark Parker, Jean Touitou, Nigo, Sarah Lerfel, this graphically inspired book provides a unique glimpse into one of the most influential tastemakers of our time.
Visa hela texten

Sarah Lerfel is the creative director of the Paris style boutique Colette.