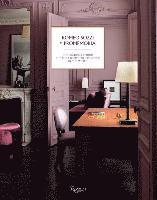 The Designer Behind the Most Beautiful Furniture in the World

av Pierre Leonforte
Inbunden Engelska, 2016-06-07
429
Köp
Spara som favorit
Kan levereras innan julafton!
As the third generation of specialized wood craftsmen in cabinetmaking and restoration, Romeo Sozzi made his debut in interior decoration in the 1970s. Since 1988, he and his three sons have run his company, Promemoria, which has become not just a producer of internationally high-profile furnishings but also a laboratory of innovative design. This volume is a discovery of Sozzi's world and work, the epitome of the refined Italian lifestyle. The journey begins with the historical family home on the banks of Lake Como, furnished throughout with a mixture of one-off pieces, antique items, and fascinating collections that include vintage automobiles, cameras, and objets d'art. The reader will peruse the spaces where Sozzi works and explore his designs, enter the space where he holds his legendary dinners, and admire his collections. The book also surveys the company's impressive production range, which has gained global recognition.
Visa hela texten

Pierre Leonforte has been the chief editor for the City Guides Louis Vuitton since 1998. As a journalist, he is a regular contributor to French magazines, newspapers, and periodicals such as Architectural Digest, Marie Claire Maison, and Le Figaro. Under the byline Le Concierge Masque, he writes a weekly feature for Vanity Fair that has an impressive following. Recently, he has written Louis Vuitton, 100 Legendary Trunks, and Louis Vuitton, Birth of Modern Luxury.