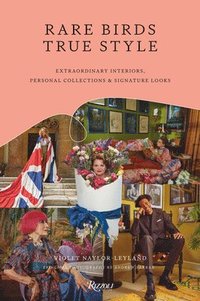 av Violet Naylor-Leyland, Andrew Farrar
Inbunden Engelska, 2022-09-27
457
Köp
Spara som favorit
Kan tyvärr inte levereras innan julafton.
This lively book celebrates unique and inspiring British style and those who own it. Spanning generations from Nicky Haslam to Alice Temperley, Beata Heuman, and Luke Edward Hall this book is an irresistible tour through the homes and wardrobes of some of England s most celebrated contemporary talents, each with their own distinctive and unconventional taste. All of the homes are original, stylish, charming, and authentic. Author Violet Naylor-Leyland has profiled her friends and family from society figures, titled aristocracy, and fashion and creative folk to a few wonderful unknowns gathering together a mixed demographic with an emphasis on unique and inimitable style, represented not only by fashion but by interiors, possessions, and in some cases examples of the work of those featured. Marrying gorgeous design with Naylor-Leyland s engaging and witty texts, this book provides rare access to the personalities featured, giving readers up-close insight into their personal tastes. Pairing gorgeous photos of interiors with engaging interviews with each subject, Naylor-Leyland shares how her subjects private spaces cultivate unique ways of living, working, and socialising. This book is perfect for lovers of interior design, fashion, and the distinctly English way of life.
Visa hela texten

Violet Naylor-Leyland is a freelance fashion stylist, journalist, and writer. She has written for various magazines including Vanity Fair, The Lady, Tatler, Bloomberg Businessweek, Evening Standard, and Departures. She began her career in fashion as shop stylist at a Sloane Street couturier Tomasz Starzewski, before assisting former Tatler fashion editor and late style icon Isabella Blow, who spotted her natural eye and offered her a job. She shadowed Caroline Sieber before taking over her role as first assistant to Laura Burlington, fashion editor at Harper's Bazaar at the time. After three years at Harper's, Naylor-Leyland went freelance, styling women, men, shoots, shows, and brands for three years before setting up a costume and vintage designer clothing studio-Violet's Box-dressing a high-end clientele for parties, including celebrities and royals. After five years, with more and more clients asking for personal styling service outside the costume studio, in 2015, Naylor-Leyland returned to freelance styling full-time, where she concentrates mainly on private clients, some of whom have been with her for many years. Naylor-Leyland helped establish Mayfair members club the Cuckoo Club, was employed by Robin Birley to create 5 Hertford Street's founder members' list. She is known for having her own irreverent style. Andrew Farrar is a London-based photographer and director specializing in filmmaking, editorial, portraiture, and advertising photography. His portraiture work includes images of Goldie, Carmen Dell'Orefice, Idris Elba, Robert Pattinson, Dynamo, Bryan Ferry, Tamara Beckwith, Derek Jacobi, and Camilla Rutherford. His work has appeared in publications such as Vogue, Elle, Nylon, Tatler, The Sunday Times Style, and Marie Claire.