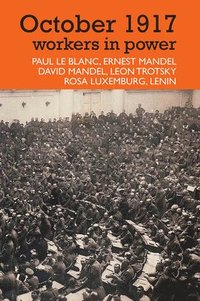 av Ernest Mandel
(1 röst)
Häftad Engelska, 2016-11-03
329
Köp
Spara som favorit
Specialorder (osäker tillgång). Skickas inom 11-20 vardagar.
Fri frakt inom Sverige för privatpersoner.
Was October 1917 a coup d'etat or a social revolution? Writing as both a historian and political activist, Ernest Mandel vigorously reasserts the deep legitimacy of the Russian Revolution. He considers mistakes made by the Bolshevik leadership in 1917-21 and sets out lessons to be learnt.David Mandel's 'Factory Committees and Workers' Control in Petrograd in 1917' draws on Russian-language archives to tell the story from below. Petrograd workers did not dream at first of 'socialist experiments'. Factory committees met fierce resistance from owners, they were driven to take management into their own hands and to seek the nationalisation of industries. Common conceptions about the 'utopian' and 'anarchistic' impulses supposedly behind the October Revolution are reassessed and refuted.The introduction by Paul Le Blanc, provides a new evaluation of the events one century on. He discusses recent scholarship and debates, new ways of comprehending class, the centrality of women and that of ethnicity, race and national identity, as well as Lars Lih's reassessment of the role of Kamenev and Zinoviev. Paul Le Blanc considers 'what went right: the revolution that brought 'bread, peace and land' to millions, and 'what went wrong'. Were the Bolsheviks elitist, sectarian and authoritarian? He assesses what is still relevant today and what is not.
Visa hela texten

ABOUT THE CONTRIBUTORS: Ernest Mandel was involved in the revolutionary socialist movement from the end of the 1930s. He was a leading member of the Fourth International until his death in 1995. His many works include Marxist Economic Theory, Late Capitalism and Long Waves of Capitalist Development. David Mandel teaches political science at the Universite du Quebec, Montreal. Among his previous works are 'The Petrograd Workers and the Fall of the Old Regime and Perestroika and the Soviet People.' Paul Le Blanc is an American historian, activist and Professor of History at La Roche College in Pittsburgh. He is the author of several books including 'A Short History of the U.S. Working Class' and 'Unfinished Leninism: The Rise and Return of a Revolutionary Doctrine'.