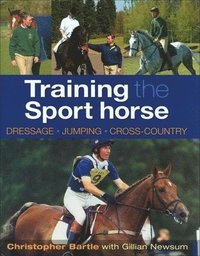 av Christopher Bartle, Gillian Newsum
Inbunden Engelska, 2004-05-01
509
Bevaka
Spara som favorit
Tillfälligt slut – klicka "Bevaka" för att få ett mejl så fort boken går att köpa igen.
Based on his experiences as an international dressage and three-day event competitor, Christopher Bartle gives the reader a complete guide to the education of horses and riders for all disciplines. The author is one of the most respected riders and trainers in the world and, now for the first time, he has produced a book so that every rider has the opportunity to learn from his training techniques. His system of training centres on the need for a partnership between horse and rider in which they share responsibilities. A clear understanding of these responsibilities is the key to success. The rider - the senior partner in the relationship - sets the goals and communicates with the horse. The horse must learn to respond but also to look after himself and not rely on the rider. "Training the Sport Horse" covers all areas from 'nursery school' to more advanced work, competition riding and problem solving. The rider's initial role is to establish his own posture and balance and learn to communicate with the horse through body language and position, using the language of touch initially to educate and then to support. There is an explanation of the horse's biomechanics - how he carries and uses himself - so that the rider can understand how to improve his horse's self-carriage and also to recognize his horse's strengths and weaknesses.
Visa hela texten

CHRISTOPHER BARTLE has had success in both dressage and three-day eventing. In 1984 he made history when he finished sixth at the Los Angeles Olympics - the highest ever position for a British rider in dressage - and in 1998 he won Badminton on Word Perfect. After studying with his mother, Nicole Bartle, and with Le Commandant de Parisot, former Ecuyer en Chief at the Cadre Noir, Christopher trained with Olympic gold medallist Hans Blixen-Finecke. For six years he was a member of the British dressage team and his memorable partnership with Wily Trout gave him two National titles amongst many other successes. As an eventer he was a member of the British dressage team which won the gold medal at the 1997 European Championships. Christopher Bartle has trained many of Britain's top event riders and was appointed dressage trainer to the British three-day event team for the Altanta (1996) and Sydney (2000) Olympics. He is trainer to the German three-day event team and managing director of the Yorkshire Riding Centre. GILLIAN NEWSUM is the author of four equestrian books and co-author of three others. Since 1982 she has been equestrian correspondent of Country Life and she also works for the Guardian. She has evented at novice level and is a regular follower of the Fitzwilliam Hunt.