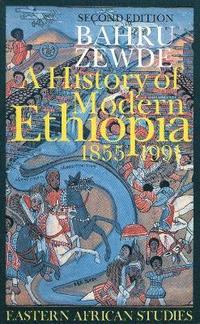 av Bahru Zewde
Häftad Engelska, 2001-01-01
229
Köp
Spara som favorit
Skickas inom 7-10 vardagar.
Fri frakt inom Sverige för privatpersoner.
Bahru Zewde has updated the first edition, adding a new chapter and taking the history through to 1991. 'The new chapter enhances the value of the book as the best historical introduction to modern Ethiopia. The account of the Revolution, contained in 41 pages, is nuanced and worthy of attention in its own right... In short, the updating of an already indispensable book.' - Donald Crummey in JOURNAL OF MODERN AFRICAN STUDIES North America: Ohio U Press; Ethiopia: Addis Ababa U Press
Visa hela texten

Reviews of the first edition (1855-1974): 'Bahru Zewde, one of present-day Ethiopia's leading historians, must be thanked for producing the first serious history of his country from the coronation of the reforming emperor Tewodros in 1855 to the Ethiopian Revolution of 1974. The work encompasses the lives of Ethiopia's four last, and most important, monarchs: Tewodros, Yohannes, Menilek and Hayla Sellase, whose reigns, as the author presents them, form an historical continuum. The text is valuable in that it provides an historical overview of virtually the entire area of present-day Ethiopia, with sections on the south of the country, largely ignored by previous historians, as well as on the better-documented Semitic north. ... The book, though less than 250 pages in length, is packed with information not readily available elsewhere, and contains valuable new historical insights. There are moreover interesting discussions of how events in one part of the region influenced the situation in others...there are also interesting sections on such topics as Hayla Sellase's ideas of government. ...The author does not ignore the more positive features of the occupation. ... Bahru's work is the first history of modern Ethiopia to be written by an Ethiopian, and thus provides a new perspective. Though later imprisoned for several years by Ethiopia's post-imperial regime he does not see the Hayla Sellase era, through which he lived as a student, with rosy spectacles. - Richard Pankhurst in JOURNAL OF THE ROYAL ASIATIC SOCIETY ...gaping void now filled with distinction by Bahru Zewde...He achieves too, the difficult tasks of balancing the political history of warlords and emperors with social and economic developments, and relating internal developments to the progressive increase in external pressures. His judgements are succinct and illuminating. ...In short, it is a model of its kind. - Christopher Clapham in AFRICAN AFFAIRS ... timely ... wealth of illustrative material ... Required reading for practitioners, graduate students and advanced undergraduates. - CHOICE